Tyler Cowen responds to some of the Great Stagnation critics by pointing to trends in total factor productivity (TFP):

The critical responses to The Great Stagnation prefer to attack median income measures and in general they are reluctant to talk about total factor productivity.  Yet we are pointed very much toward the same conclusion.

The point is that the Great Stagnation theory matches nicely with the standard story of TFP growth:  there was a "golden age" of TFP growth during the1948-1973 period, but thereafter it stalled  until about 1995.  That is an interesting rebuttal from Cowen, but haven't we made some impressive TFP gains since 1995 given the advances in technology?  To see just how marked this TFP decline was after 1973 and whether the recent TFP gains make up for any of the loss, I went to the data.  Below is a figure constructed using the quarterly TFP series of John Fernald at the San Francisco Fed. (Click on figure to enlarge.) 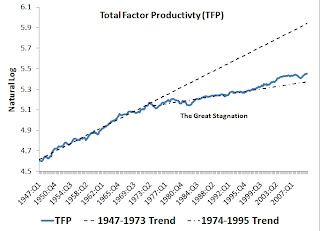 Okay, I am impressed and far less skeptical of the Great Stagnation theory. In my previous post I argued that Cowen failed to appreciate how dramatically our lives have changed since the advent of the internet and faster computing.  Now I am thinking these gains are but a faint shadow of what they could have been had TFP continued to grow at its 1947-1973 trend.  The "good old days" really were better in terms of TFP growth.

Still, I wonder how much of the true, underlying TFP gains are being measured given the large share of our economy that is in the service sector, where  output and productivity are hard to measure.  Also, I am optimistic that we are on the cusp of a Great Acceleration for the global economy.  Technological gains continue and the rest of the world's catch up growth is bound to create positive spillover effects for the  advanced economies. As I mentioned before, imagine what will happen to R&D funding on cancer and AIDS once several billion Asians are rich enough to start demanding it.  (In fact, they may be a big part of the solution to U.S. health care problems.) This HSBC report also makes the case for an impending Great Acceleration.  I am optimistic about the future.
Posted by David Beckworth at 11:16 AM