It is hard to believe that it has been  two years since hyperinflation ended in Zimbabwe. In fact, enough time has passed that now the 100 trillion dollar Zimbabwe note shown below is gaining value with collectors. 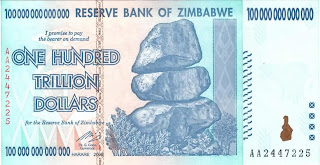 The reasons the Zimbabwe hyperinflation ended were (1) the country abandoned the production of its own currency and (2) it allowed foreign currencies to be used as legal tender. As result, foreign currencies started functioning as the medium of exchange and goods started appearing in formerly barren stores throughout Zimbabwe. The main foreign currency that is now used in Zimbabwe is the U.S. dollar.
Now dollarization means your monetary policy is tied to the U.S. monetary policy, so it would be interesting to know how QE2 is affecting Zimbabwe.   Also, to earn more dollars Zimbabwe needs to run trade surpluses, but Robert Mugabe's economic policies are not very conducive to that end.   Thus, while dollarization  is tied to the ending of hyperinflation, it could also impose a straitjacket on the economy.  One solution would be to allow a free banking system in Zimbabwe, where the U.S. dollar remains the reserve currency  but banks are allowed to issue their own notes and coins that would be backed by the dollar.  If set up correctly, this free banking system could solve most of the money issues. (See this Federal Reserve Bank of Richmond interview with George Selgin for more on how free banking would work.)

One issue that has emerged is the shortage of coins.  Here is a central banking.com article on the issue (hat tip: Steve Hanke):


Local media reported last month that the Federal Reserve had formally agreed to supply US coins to Zimbabwe, where shopkeepers are suffering a shortage of change. The African economy switched to dollarisation in early 2009 in order to temper a severe bout of hyperinflation.

However, the Fed has not made a formal agreement to supply Zimbabwe with coins. Instead, US government officials are understood to have suggested to the Zimbabweans that if they want coins, they get them through a commercial bank that specialises in wholesale shipment of currency.

The IMF is said to have suggested that Zimbabwe have its own coins but back them with foreign assets.

Zimbabwe agreed to allow businesses to accept multiple currencies, including the dollar, the rand, the pula, the euro and sterling, in January 2009. Dollarisation occurred the following month after the election of Morgan Tsvangirai.

Obviously, there are bigger structural problems to address in Zimbabwe but at least the country has made significant progress reforming its monetary system.
Posted by David Beckworth at 9:32 AM