Has the Fed Done Too Little or Too Much?

David Leonhardt of the New York Times says too little:


It’s clear which way the Fed has erred recently. It has done too little. It stopped trying to bring down long-term interest rates early last year under the wishful assumption that a recovery had taken hold, only to be forced to reverse course by the end of year.

Given this recent history, you might think Fed officials would now be doing everything possible to ensure a solid recovery. But they’re not. Once again, many of them are worried that the Fed is doing too much. And once again, the odds are rising that it’s doing too little.

Yes, the Fed fell asleep on the job last year and yes, QE2 was a weak version of what could have been a more effective monetary stimulus program where the price level or nominal GDP level  was targeted. What is not true is that a successful monetary stimulus program will be defined by sustained low long-term interest rates.  A successful monetary stimulus by definition would lead to a robust recovery.  Though this would be initially associated with lower interest rates, the robust recovery should ultimately lead to higher interest rates.  Given the forward looking nature of markets, just the expectation of  an increase in economic activity should put upward pressure on current interest rates.  Initially, this seemed to be happening with QE2: long-term interest rates dropped and then started to increase as growth expectations picked up.  Bernanke, of course, took credit for this development.  Now, long-term rates are nudging down again as growth expectations stall. One could call this a passive tightening of monetary policy.

Update: I meant to include this picture of the the nominal and real (i.e. TIPS) 10-year treasury interest rates. 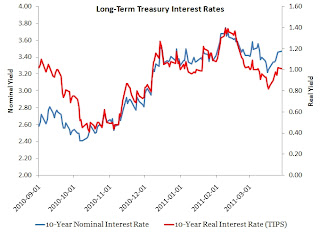 Posted by David Beckworth at 3:12 PM