The Three Monetary Systems During the Civil War

Since Paul Krugman is talking about the 150th anniversary of the U.S. Civil War outbreak, it is worth recalling  the great monetary experiments created by the Civil War.   This great event resulted in the establishment of  three monetary regions in the United States: the Greenback monetary system, the Yellowback monetary system, and the Confederate monetary system.
The Greenback monetary system emerged in the East when the gold standard was suspended so fiat currency could be introduced in 1862.  There was no central bank at the time, so the new fiat money   popularly known as the greenback was introduced by the U.S. Treasury.  Ironically, the Treasury Secretary who introduced the Greenbacks, Salmon Chase, would later become Chief Justice of the Supreme Court and rule that the fiat currency was unconstitutional.  The Greenbacks were highly inflationary as seen in the figure below: 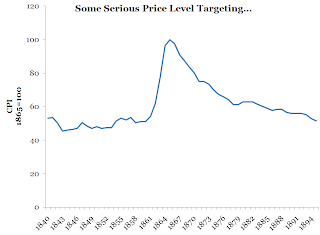 Between 1862 and 1865, the price level rose about 60% because of excessive issuance of greenbacks.  Over the next thirty years, the price level decline by almost 50% due in part to a desire to return to the gold standard by 1879.  Doing so required either retiring the greenbacks (done initially) or freezing the stock of greenbacks (done later) and allowing the economy to grow into them. Once the gold standard was resumed, the price level continued to fall as the growth in gold was slower than the growth of the economy.   Eventually, the price level was about where it was prior to the Civil War.  Fortunately, this 30 year run of falling prices was associated with on average rapid real growth, rising real wages, and increasing financial intermediation as noted here.
The Yellowback monetary system emerged in California during the Civil War.  California never left the gold standard and it dollars remained gold-backed.  These so called yellowbacks floated against the greenbacks until resumption of the gold standard in 1879.  Greenbacks did find their way to California, but were quickly returned to the East as payment.  No greenback banks every took hold in California. Because the Yellowback monetary system continued until 1879, the United States truly was a dual currency nation during this time.  Hugh Rockoff marvels at this dual monetary experiment:

[F]rom 1865 to 1879, when the greenback currency became convertible into gold we have a monetary rarity: a strong political union, untouched by war, with two currencies, greenbacks and yellowbacks, circulating at a floating exchange rate.

[Update: Here is another Hugh Rockoff paper on the Yellowbacks.]


The Confederate monetary system emerged in the South as a way for the South to gain autonomy and finance the war effort.  The confederate dollar was a fiat money like the greenback and its value ultimately rested on the outcome of the war.  Thus, whenever the South was winning victories the confederate dollar appreciated and when the North was winning it depreciated.  Here is a picture from Feenstra and Taylor International Economics textbook that captures these developments: 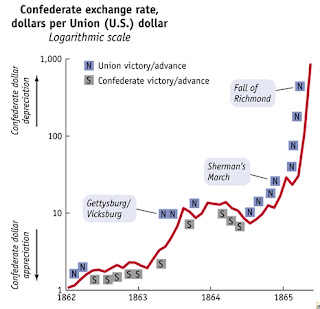 Though there were other important monetary changes during Civil War like the introduction of the flawed National Banking System, the three monetary system that emerged during the Civil War was truly a remarkable development.
Posted by David Beckworth at 4:58 PM