I Hate to Keep Making This Point, But It Needs to Be Said

The anemic economic recovery can be tied to the ongoing elevated demand for safe and liquid assets.  Paul Krugman and Brad DeLong refer to this phenomenon as a liquidity trap; I like to call it an excess money demand problem.  Either way the key problem is that there are households, firms, and financial institutions who are sitting on an unusually large share of money and money-like assets and continue to add to them.  This elevated demand for such assets keeps aggregate demand low and, in turn, keeps the entire term structure of neutral interest rates depressed too.  (Note, that since term structure of neutral interest rates is currently low, it makes no sense to talk about raising interest rates soon.  That would push interest rates above their neutral level and further choke off the recovery.)
As Scott Sumner notes, the weak aggregate demand also makes structural problems more pronounced.   Many observers, for example, claim that firms are not hiring because of all the regulatory uncertainty--e.g. Obamacare--coming from the federal government.  This may be true, but consider how firms would be acting if their sales were rapidly growing. At some point, the marginal benefit of another employee would exceed the elevated marginal cost of that worker coming from the regulatory uncertainty.  Firms flush with growing revenues and expected higher sales would feel less constrained by the regulatory changes when hiring workers.  To the extent, then, that regulatory changes are causing problems for the labor market, it is highly exacerbated by the low level of aggregate demand.
Again, the weak aggregate demand can be traced back to the elevated demand for money and money like assets.  Here is one figure that is consistent with that claim.  This figure shows monthly job openings for the U.S. economy along with monthly money velocity, an indicator of the demand for money.  The relationship is surprisingly strong and is consistent with the implications of the figures shown in my previous post. 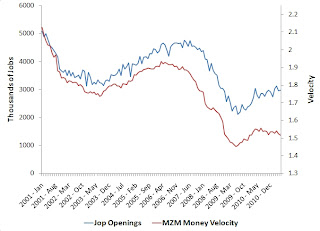 Source: Macroadvisers, FRED, BLS
The question then is how to change the dreary economic outlook that is causing households, firms, and financial institutions to hold relatively large shares of money and money-like assets.  The best way to do it would be for the Fed to adopt a level target, such as a nominal GDP level target.  It would go a long ways in appropriately shaping nominal expectations and in bringing aggregate demand back to a more robust level.   Finally, ignore all those naysayers who say it cannot be done in a balance sheet recession or who say there is no magic lever that can revive the economy.  They don't know their history.  It worked for FDR in 1933-1936 and could work now too.

Update:  Here and here are some posts that explain how a nominal GDP level target could restore aggregate demand to a robust level.
Posted by David Beckworth at 12:47 PM