The main reason U.S. companies are reluctant to step up hiring is scant demand, rather than uncertainty over government policies, according to a majority of economists in a new Wall Street Journal survey...In the survey, conducted July 8-13 and released Monday, 53 economists—not all of whom answer every question—were asked the main reason employers aren't hiring more readily. Of the 51 who responded to the question, 31 cited lack of demand (65%) and 14 (27%) cited uncertainty about government policy. The others said hiring overseas was more appealing.

This conclusion is supported by the findings in the most recent NFIB's survey of small businesses.  This survey has consistently shown, and shows for June, that the number one problem facing small business is not regulation or taxes--though they do matter according to the survey--but weak sales.  Here is a table, for example, from the June, 2011 survey that underscores that it is weak sales more than anything else that is creating stress for small firms. Note that regulatory costs and taxes are captured under the increased costs category (see underlined footnote). 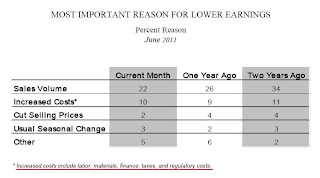 
[L]ook at the table on page 20 of the report. Once again, only a very small percentage of firms list "quality of labour" as their most important problem. 5% today, compared to 4% one year ago, 3% as the survey low, and 24% as the survey high.  The fact that labour is so easy to hire is more confirmation that there's generalised excess supply, and the problem is AD.

Posted by David Beckworth at 1:34 PM