Mark Thoma is frustrated to see some commentators once again push the view that Fannie and Freddie caused the economic crisis. When this issue arose back in late 2008, Richard Green's figure on the share of mortgage debt outstanding held by type of institution settled the debate for me.  That figure showed the GSE's share declined during the housing boom while the asset-back security issuers' share increased.  Here is an updated and slightly modified version of that figure: (Click on figure to enlarge.) 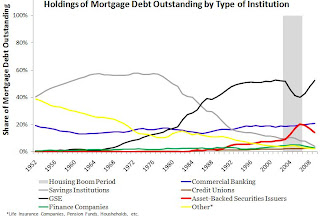 Source
The data is unambiguous here: Fannie and Freddie were not the immediate cause of the housing boom.   They may be guilty of a number of things, but directly causing the housing boom is not one of them.
Posted by David Beckworth at 11:30 PM