Lowering the IOER is Not So Scary

Can the Fed really add more stimulus by lowering the interest paid on excess reserves (IOER)? Many observers say yes and are encouraged by the ECB's decision to do just that.  The idea behind this belief is that banks would invest their excess reserves in other assets if the IOER was below, or at least equal to, the market interest rate for safe assets.  This rebalancing of banks' portfolios would in turn cause a rebalancing of the non-bank public's portofolio and help kickstart a recovery.

The folks at FT Alphaville, however, are not so sure.  They see problems with lowering the IOER.  They are concerned that doing so would eliminate the net interest margin for money market funds (MMFs) and drive them out of business.  The funds sitting at MMFs would then move directly to banks, which also face low net interest margins and increasing FDIC fees.  Banks, then, might start charging customers for deposit accounts and this, in turn, might cause the public to want to hold more cash.  As a result, financial intermediation would further weaken and the economy would sink even more.

That is a scary story.  The folks at FT Alphaville say the only way to avoid this outcome is if fiscal policy complimented the lowering of IOER by providing more safe assets in which financial firms could invest their would-be costly excess reserves.  Cardiff Garcia of the FT Alphaville wants to know what the Market Monetarists, long-time advocates of lowering the IOER, think of this scary scenario.

Here is  my take.  The FT Alphaville story fails because it ignores the broader effect of the Fed lowering the IOER.  Such an announcement, if credible, would send a loud signal to markets of more monetary stimulus.  And if done right, this signal would have a huge impact because lowering the IOER is tantamount to saying the Fed is going to permanently increase the monetary base.  A permanent increase in the monetary base implies a permanently higher price level and permanently higher NGDP level down the road.  In other words, lowering the IOER would permanently raise expectations of future nominal spending and income.  As a result, demand for financial intermediation services would increase today as firms, households, and governments planned for the higher level of NGDP.  The increased demand for credit would raise financial firms' net interest margins and more privately-produced safe assets would appear.  No doomsday for MMF and a recovery ensues.

Now I do think that the signal from lowering the IOER would be even more effective if it were done in conjunction with the announcement of a NGDP level target.  It would provide a destination point for nominal spending and nominal income that would better focus the public's expectations.

The folks at FT Alphaville are correct, tough, that fiscal policy could be a part of the NGDP recovery process if it created more safe assets.  Treasuries and GSEs function as money for many institutional investors and thus are an important part of the money supply and any NGDP recovery.  However, the amount of safe assets needed for a full recovery of aggregate demand seems far too large to be met by publicly-created safe assets alone. 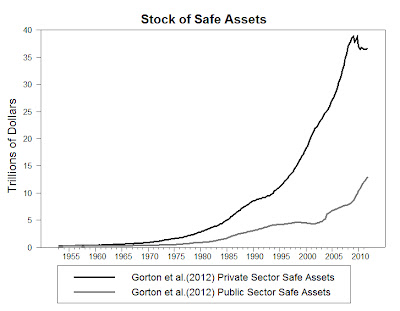 Privately-produced safe assets have fallen since 2008 and have yet to return to their peak value, let alone their pre-crisis trend.  Publicly-produced safe assets have somewhat compensated for the collapse, but not enough.  This is self evident from the ongoing slump in nominal spending, but also can be seen in the figure below which shows the deviation of the two series from their Great Moderation (1983-2007) trend in dollar terms. 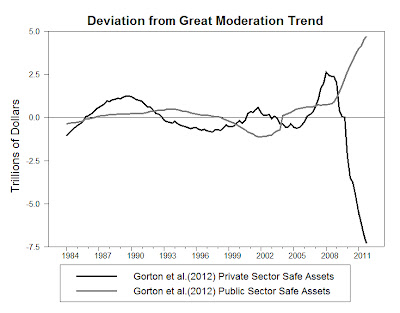 But then it is not needed.  As outlined above, lowering the IOER and adopting a NGDP level target should incentivize the private production of safe assets and spark a robust recovery in aggregate demand.  Lowering the IOER need not be scary.

P.S. I first raised concerns about the IOER back in October, 2008.
P.P.S. Here is a similar comment for Izabella Kaminska at FT Alphaville.

Update: David Glasner also weighs in on lowering the IOER.
Posted by David Beckworth at 3:47 PM