Does economic uncertainty matter?  Yes, says Stanford professor Nicholas Bloom, University of Chicago professor Steven Davis, and Stanford grad student Scott Baker in a new paper titled Measuring Economic Uncertainty.  They find that economic uncertainty caused  real GDP to decline 3.2% over the past few years. This paper has stirred controversy because it has been used by conservatives to show that uncertainty created by President Obama is the main reason for the ongoing slump.  Some observers like Mike Konczal, Dylan Matthews, and Matt O'Brien have questioned the use of this index on methodological grounds as well as on its proper interpretation.  The latter point is really important.  While there can be exogenous shocks to uncertainty such as the debt ceiling talks last year, uncertainty is always with us and is endogenous to the the state of the economy.1   That is, people get more uncertain the weaker the economy becomes and vice versa.

Here are some figures that illustrate this point.  The first one shows a 3-quarter centered moving average of the paper's uncertainty index along with the nominal GDP (NGDP) gap.  This gap measures aggregate demand deficiency and is calculated as the percent difference between potential and actual NGDP: 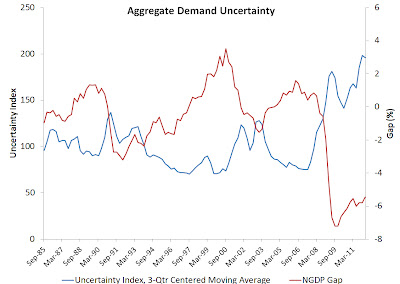 The two series are clearly related.  The next figure shows the strength of this relationship: 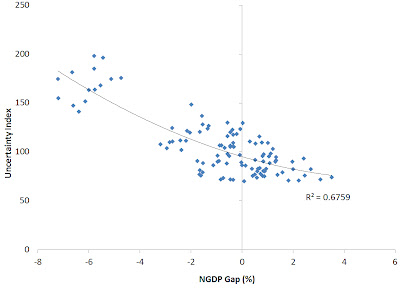 This scatterplot does not establish causality, but it does suggest that about two thirds of economic uncertainty can be traced to a shortage of aggregate demand.  Mike Konzcal might argue the relationship would be even stronger if not for the measurement problems. Even so, this is still a strong relationship and implies that Fed could do far more to spur a recovery by closing the NGDP gap.

Even if one believes causality runs form greater uncertainty to lower NGDP, the Fed still should respond.  For the reason greater uncertainty matters is that is raises money demand which, for a given stock of money assets, causes a slump in nominal spending.  The Fed could ease uncertainty and the resulting money demand by committing to a NGDP level target.  This would close the NGDP gap and add certainty to the future path of nominal incomes.  The failure of the Fed to do this means the economic uncertainty is as much a byproduct of the Fed's inaction (i.e. passive tightening) as it is anything else.

1Even the debt ceiling crisis to some extent was endogenous. For had there been no Great Recession, both cyclical and structural budget deficits would have been much smaller.

Update: For those wanting more evidence of an AD shortfall see here.
Posted by David Beckworth at 1:43 PM