When Monetary and Fiscal Policy Collide: the Interesting Case of Floating Rate Notes

One of the FOMC's more recent policy innovations is Operation Twist.  Initiated last September, this program aims to shrink the average maturity of publicly-held U.S. Treasury debt and thereby encourage a rebalancing of private portfolios toward riskier assets. This rebalancing, in turn, would help spur a recovery in aggregate nominal expenditures via balance sheet and wealth effects.  At least that is how it is suppose to work.


There are, however,  two big problems with this initiative.  First, it has not been accompanied by an explicit economic target and therefore does little to improve nominal spending expectations.  Second, it has been countered by the U.S. Treasury which is increasing the average maturity of publicly-held debt.  This can be seen in the figure below which comes from a recent U.S. Treasury report: 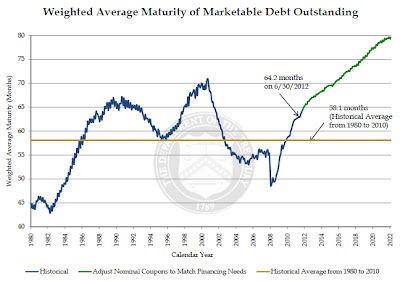 Not only has the Fed been failing to lower the average maturity, but it faces a U.S. Treasury determined to continue raising it as seen by the green forecast line. Below is another figure from the report that shows the actual and forecasted shares of different types of treasuries publicly held.  Again, it is evident that longer-term treasuries will continue to grow in importance: 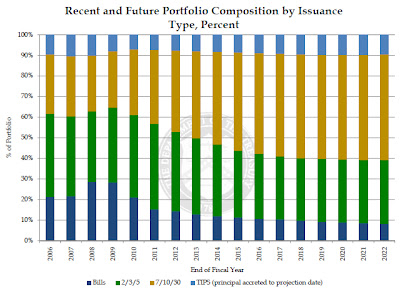 Now Operation Twist has not been completely futile.  By swapping its short-term treasuries to the public in exchange for their long-term treasuries, the Fed has forced the U.S. Treasury to face unexpected financing costs. Operation Twist has and is placing in the public's hands treasuries that are are coming due sooner than their previously-held long-term treasuries.  This means the U.S. Treasury will have to pay the public sooner than it had planned.  Here is another figure from the report that shows how much these additional payments will be through 2016: 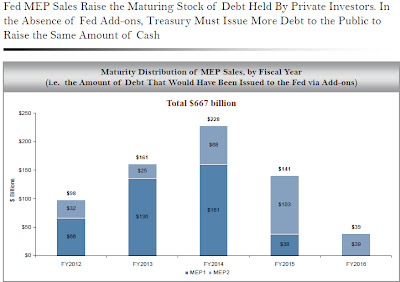 Yep, that is an additional $667 billion the U.S. Treasury was not expecting to have to cough up over the next four years.  To be clear, this is not an adding to the total stock of debt, but is pulling forward the payment date of publicly held debt.

So how will the U.S. Treasury pay for it? By rolling over the debt of course.  And not just any new debt, but a special new kind of floating rate note that will come out in a year.  Gregg Robb reports that industry experts say there will be “strong, broad-based demand” for the floating-rate notes and that their interest rates will not be tied to Libor.  I am sure John Cochrane is happy about the latter point, but it is still not clear to what they will be tied.


This is an interesting case of monetary and fiscal policy colliding and creating unintended consequences.  It is also an illustration of why the Fed should have been doing open-ended QEs tied to a nominal GDP level target instead of its current piecemeal approach of which Operation Twist is a part. For had the Fed done open-ended QEs, it would have sent a jolt to public expectations and catalzyed a broad-based recovery where the market did most of the heavy lifting.  The Fed would not have needed to resort to vast asset purchases and consequently there would be fewer treasury market distortions.  In other words, most of these developments could have been avoided had the Fed taken the Chuck Norris approach to central banking.
Posted by David Beckworth at 1:15 PM