The Book Ben Bernanke Does Not Want You to Read 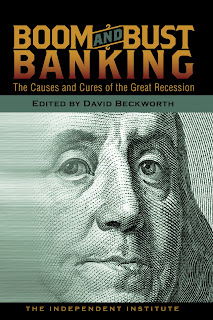 The Independent Institute has published a new book that every thoughtful Fed watcher should read.  It makes the case that rather than dampening the business cycle over the past decade the Fed has actually amplified it.  The book consists of essays from a number of economists and has something for everyone.  Austrians will like that the book argues the Fed enabled the housing boom, while those sympathetic to the Market Monetarist view will appreciate its claim that the Great Recession was the result of too tight monetary policy.  Advocates of MMR and MMT will appreciate the book's critique of the procyclical financial system and its suggestions for reform.  As I said, something for everyone.

Here are first few paragraphs of the introductory chapter:

In 2009 the entire world economy stopped growing, the first time this had happened in well over 50 years. In the United States, the epi-center of the great recession, GDP shrank, unemployment rates skyrocketed, and budget deficits exploded. The 21st century had opened with optimism as first technology and then housing boomed, but by the end of the decade confidence had been drained. Why did the boom and bust cycle return in such force after several decades of economic stability? Most studies answer this question by pointing to financial innovation, a global saving glut, poor governance, industry structure, housing policy, and misaligned creditor incentives.   Though these areas are an important part of the story, the amount of attention given to them makes it easy to ignore the errors of perhaps the single most powerful actor in the world economy today, the U.S. Federal Reserve.   The chapters in this book offer some much needed perspective by shifting the focus back to the Federal Reserve.  These essays conclude that the wide swings in the economic activity could not have occurred without the destabilizing policies of the Federal Reserve.

Former Federal Reserve Chairman William McChesney Martin once famously quipped that it was the central bank’s job to take away the punch bowl just as the party is getting good. The essays in this book show that rather than follow this advice, the Federal Reserve spiked the punch bowl and then kicked the hung-over economy out to the street at the worst possible time.  Monetary policy was strengthening the business cycle instead of leaning against it during the 2000s.

The context for this “leaning with the wind” rather than against it by the Federal Reserve begins with the expansion that followed the 2001 recession.  Though centered on housing, this expansion grew and pulled in many different parties including builders, subprime borrowers, mortgage originators, investment bankers, rating agencies, and investors from around the world.  It also elevated the importance of structured finance and the shadow banking system. The pace of the expansion accelerated and soon it became the Great Boom of the 2000s.  Like other big booms before, it was characterized by excessive leverage, mispricing of risk, soaring asset prices, and a pervasive “it’s different this time” optimism.  By 2007, however, the Great Boom had ended. It was soon followed by financial stress and the beginning of what was initially a mild recession. By late 2008 the financial stress had turned into a severe financial crisis that froze up credit markets and led to a sharp decline in the stock market.  Similarly, by late 2008 the mild recession had mutated into one of the sharpest economic downturns since the Great Depression.  This Great Recession was characterized by a dramatic collapse in spending and double digit unemployment.

Chapters by Lawrence H. White, David Beckworth, Diego Espinosa, and Chris Crowe show that the leaning with the wind began when the Federal Reserve failed to tighten monetary policy sooner in the 2002-2004 period.  The economic recovery was well underway by that time and yet monetary policy remained extremely accommodative throughout this period.  As a result, the recovery that followed the 2001 recession got turned into the Great Boom.  Chapters by Scott Sumner, Jeffrey Rogers Hummel, Bill Woolsey, and Nick Rowe show that when the economy began contracting in 2008 the Federal Reserve once again leaned with the wind by effectively tightening monetary policy. This response turned what was initially a mild recession into the Great Recession.

Going forward, what can be done to avoid repeating these monetary policy mistakes?  Chapters by Joshua Hendrickson, William R. White, Lawrence Kotlikoff, and George Selgin address this question.  They acknowledge as a starting point that monetary policy should a better job stabilizing nominal spending in a rule-based fashion.  Several chapters even make the case for a nominal income targeting rule.  One implication of these chapters is that had the Federal Reserve been stabilizing nominal spending the Great Boom and the Great Recession of the 2000s may have never happened.  Other chapters, however, question if stabilizing nominal spending is enough or if it is even possible given our current institutional arrangements for monetary policy.   These essays, therefore, call for other reforms that aim to reduce the procyclical tendencies of the financial system while other chapters call for alternative monetary institutional arrangements altogether.  Given the ongoing interest in reforming the Federal Reserve, these chapters provide a good starting point for considering how to do it and more generally how to maintain macroeconomic stability.

Now go buy your copy! And yes, I am the editor of the book.
Posted by David Beckworth at 10:19 AM