Abenomics and the Supply of Safe Assets

One of the big challenges facing the global economy is the shortage of safe assets. These are the highly liquid, information-insensitive assets that function as money. The financial crisis raised the demand for these safe assets just as many of them were disappearing. This cyclically-driven safe asset shortage (or excess money demand) that emerged continues to this day and is why aggregate demand in many countries remain depressed.1

The figure below illustrates this problem for the United States. It shows the Gorton et. al.(2012) safe assets measure along with the amount of safe assets needed to hit the pre-crisis trend growth path for NGDP as well as the CBO's full-employment level of NGDP.2 It shows an ongoing gap that is preventing a robust recovery from occurring. 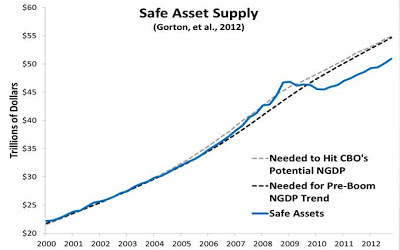 The big question, then, is how to restore an adequate supply of safe assets. Given the Triffin Dilemma, I have argued the only sustainable way this can happen is if the public's perception about the safety of private debt improves and thus raises investors' demand for it. In other words, the relatively high risk premium on private debt relative to treasuries must come down so that private securities can be view as more safe and used as money. But how?

My answer, which assumes that the relatively high risk premium is result of excessive pessimism, is that we need a major slap to the market's face. Something that would "shock and awe" investors into more normal portofolio holdings and along the way spur aggregate demand. I claimed an aggressive NGDP level target that significantly raised expected nominal income growth would do just that. It would both reduce the excess demand for safe assets (because of greater nominal income certainty going forward) and at the same time catalyze financial firms into making private safe assets (because of the improved economic outlook and the related increased demand for financial intermediation).

The only problem with my story is that it seemed it would never get tested. But that was before Abenomics. Though it doesn't target NGDP, Abenomics does create a radical departure from past economic policy in Japan. Among other things, it has committed the Bank of Japan to open-ended asset purchases until inflation hits 2% and the monetary base doubles. This has provided a significant jolt to expectations, a big regime change that should catalyze the demand for and supply of privately-created safe assets if my story has merit.

So what has happened? Is there any evidence that Abenomics is catalyzing a major portfolio rebalancing that is leading to more privately-created safe assets?  On the portfolio rebalancing front, circumstantial evidence suggests that answer is yes. The figure below shows the 10-year government yield in Japan is sharply rising. This indicates investors are, at a rapid pace, starting to move out of government debt and into other assets: 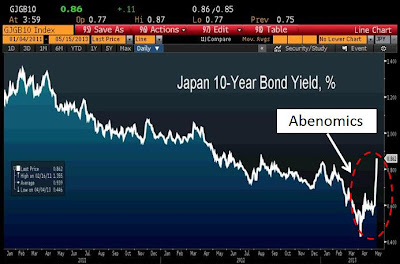 And it appears that those other assets investors are moving into include private debt. The figure below shows an average CDS spread equally weighted over 50 Japanese corporate bonds. This risk premium measure on corporate securities shows a rapid decline since the beginning of 2013, a sign that portfolios are rebalancing toward corporate debt. 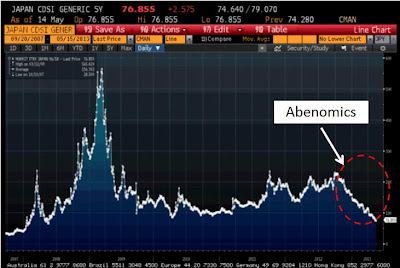 But what about safe asset creation? Is there evidence that Abenomics has also catalyzed privately-produced safe assets? To answer this question we turn to the broadest measure of money, L, that is tracked by the Bank of Japan. The L money supply includes both retail and institutional money assets and is similar in scope to the U.S. M4 money supply tracked by the Center for Financial Stability. If privately-created safe assets were increasing in response to Abenomics we would expect to see it in this measure. And we do, as seen in the figure below: 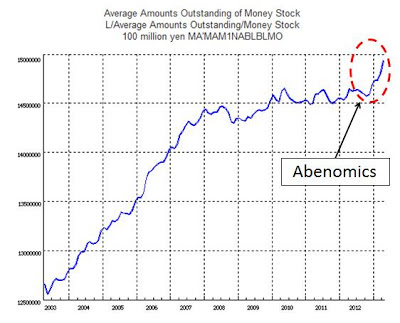 This figure indicates that the right kind of QE can actually increase the supply of safe assets. Many observers think that QE simply swaps one safe assets for another with no effect. But the right kind of QE--one that leads investors to expect a permanent increase in the monetary base--can raise the supply of safe asses and help shore up a strong economic recovery for a depressed economy. It worked for FDR in 1933 and it appears to be working for Shinzo Abe in 2013.

With all that said, Abenomics is in its early stages and a lot could still go wrong. So this preliminary evidence may not be the last word.

1There is also a structural safe asset problem that has been in play well before the crisis began. This safe asset shortage problem is the consequence of the world economy growing faster than the global capacity to produce safe assets.
2The amount of safe assets needed to hit the pre-crisis trend NGDP path and CBO full-employment NGDP is calculated as follow. I solve for the optimal amount of money in the equation of exchange given an optimal amount of Nominal GDP (the pre-crisis trend and CBO values) and actual trend money (safe asset) velocity as estimated by the Hodrick-Prescott filter. That is, I am solving for M* in M*t= NGDP*t/V*t .
Posted by David Beckworth at 9:25 PM