Is the Fed's Able to Offset Austerity? Insights from the Employment Report

The April employment report came out today and is better than expected. The number of new jobs exceeded the median forecast, the previous two months job numbers were revised upward, and the unemployment rate fell to 7.5%. This report is not what one would expect if fiscal austerity were overwhelming the Fed's efforts to shore up the economy. But the report also is not what one would expect if the Fed were unloading both barrels of the gun at the economy. The April employment rate, therefore, reveals both the strength and weakness of the Fed's efforts.

On the first point, Mike Konczal and Paul Krugman claimed earlier this week that the contraction of U.S. fiscal policy in 2013 was trumping the Fed's QE3 program and, in so doing, undermining the views of Market Monetarists like Scott Sumner and me. The employment report and its revisions to the previous months throw some cold water on their claim. But this should not surprise anyone, since fiscal austerity has been happening from 2010 and it has yet to stop the steady progression of nominal GDP (NGDP) growth.

This can be seen in the figures below. The first figure shows that the cyclically adjusted (i.e. structural) budget balance as a percent of potential GDP has been shrinking since 2010. This is the budget balance due to policy changes, not from changes to the economy. It shows fiscal tightening over the past three years: 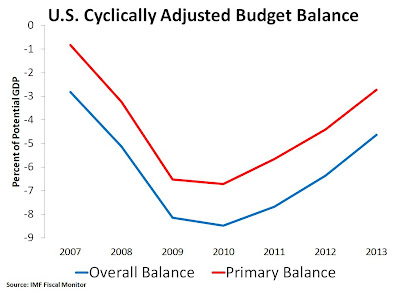 And what has this fiscal tightening done to aggregate demand (i.e. NGDP) growth since that time? The figure below shows it has done nothing: 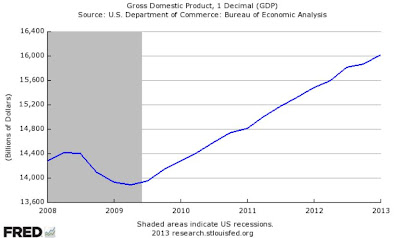 This broader 3-year experiment of fiscal policy versus money policy is the one Konczal and Krugman should be examining. Instead, they focus on the first quarter of 2013 and miss the forest for the trees.

With all that said, the stable employment and AD growth is far from what is needed for the economy to reach escape velocity. Therein lies the shortcoming of QE3 and the other, previous asset purchasing programs of the Fed. They have been enough to stabilize growth, but not enough to shore up a robust recovery. And that is frustrating to watch.

This frustration led me to propose earlier this week that the Fed make the size of its monthly asset purchases under QE3 conditional on how fast the economy was reaching the Fed's targets. Ryan Avent came up with a similar proposal. And then the Fed announced later in the week that it was prepared to do something just like this:

The Committee is prepared to increase or reduce the pace of its purchases to maintain appropriate policy accommodation as the outlook for the labor market or inflation changes.

It is as if Fed officials were reading our blog posts! Okay, maybe not. More realistically, they too see the problems with QE3--it is applying the same pressure to the gas pedal irrespective of how the terrain on the road changes--and want to improve it. Unfortunately, the Fed did not get more specific than this statement so we don't know how or when this will happen. Josh Barro thinks it is unlikely it will ever happen. I hope he is wrong, otherwise we face a long journey to full employment.

Update: Robert Waldman replies to the post. Here is my response to Waldman.
Posted by David Beckworth at 2:54 PM