A Surprising Look Back at the Fed's QE Programs

The Fed's QE3 program is scheduled to end later this year. This will bring to a close the Fed's five year experiment with QE programs. They have been incredibly controversial, especially among those who believe these programs enabled the federal government to run large budget deficits. Those holding this view typically make one of two claims. First, the large scale asset purchases (LSAPs) done under QE meant the federal government had a guaranteed purchaser of its securities. Second, the QE programs kept the federal government's financing charges inordinately low. So are these claims correct? Let's look back at the data to find out.

Consider first the Fed's share of marketable U.S. treasuries as seen in the figure below. The Fed's treasury holdings have gone from just under $0.8 trillion in late 2007 to about $2.39 trillion as of June, 2014. Over the same time, other holders of treasuries have gone from roughly $4.4 trillion to about $10.2 trillion. 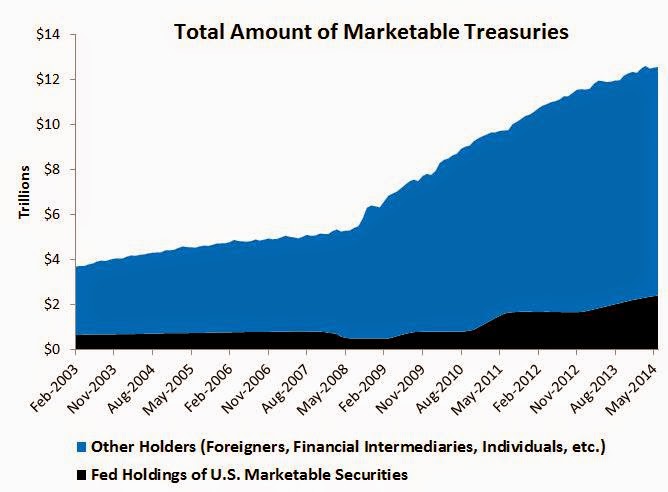 The next figure shows these same two groups in terms of cumulative change in their holdings since the beginning of 2007. Note that the Fed actually sold off a sizable portion of its treasury holdings during 2008 just as the government deficits started growing. 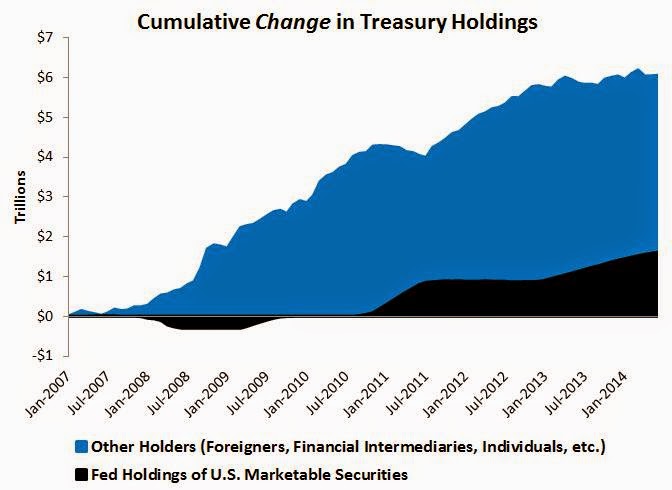 In total, the Fed has acquired about $1.6 trillion of treasuries compared to $5.8 trillion acquired by the other holders. The largest run up in U.S. debt history, then, was mostly funded by foreigners, financial intermediaries, and individual investors. It was not the Fed.

Now it is true that under QE3 the Fed did start to buy up more long-term treasuries, so it could still be guilty of distorting long-term yields. The figure below shows the composition of its holdings relative to the total amount (not including TIPs) as of June, 2014: 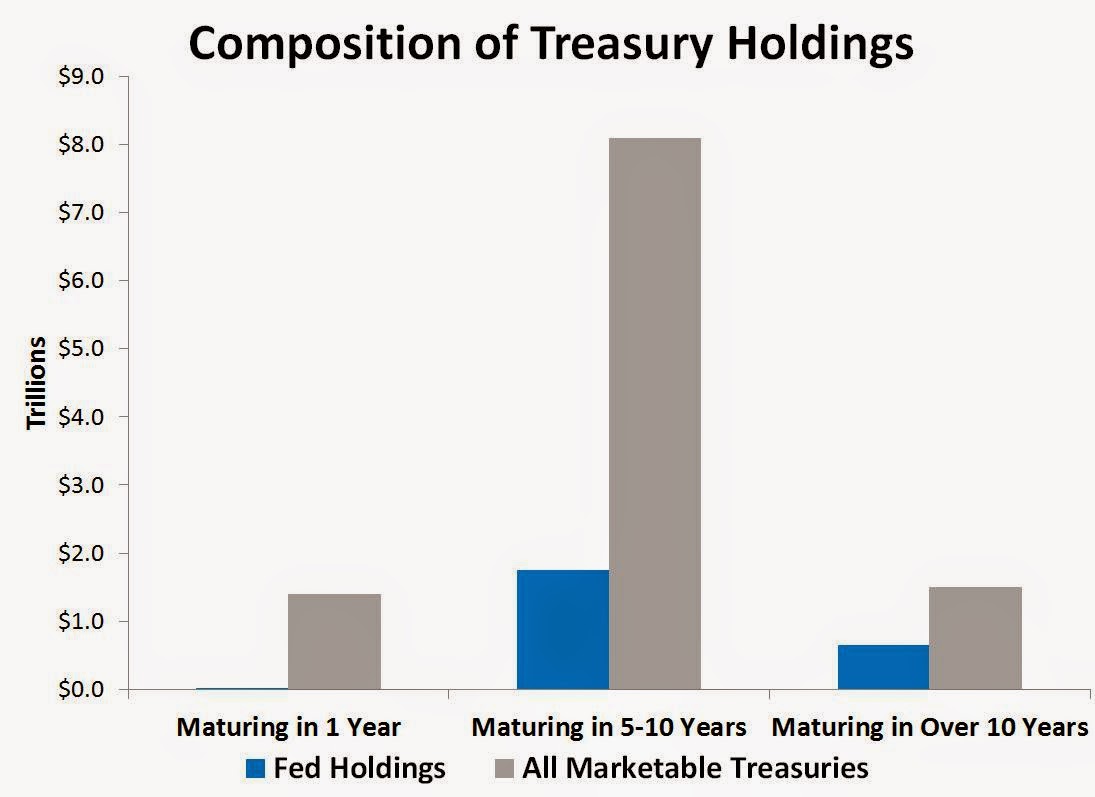 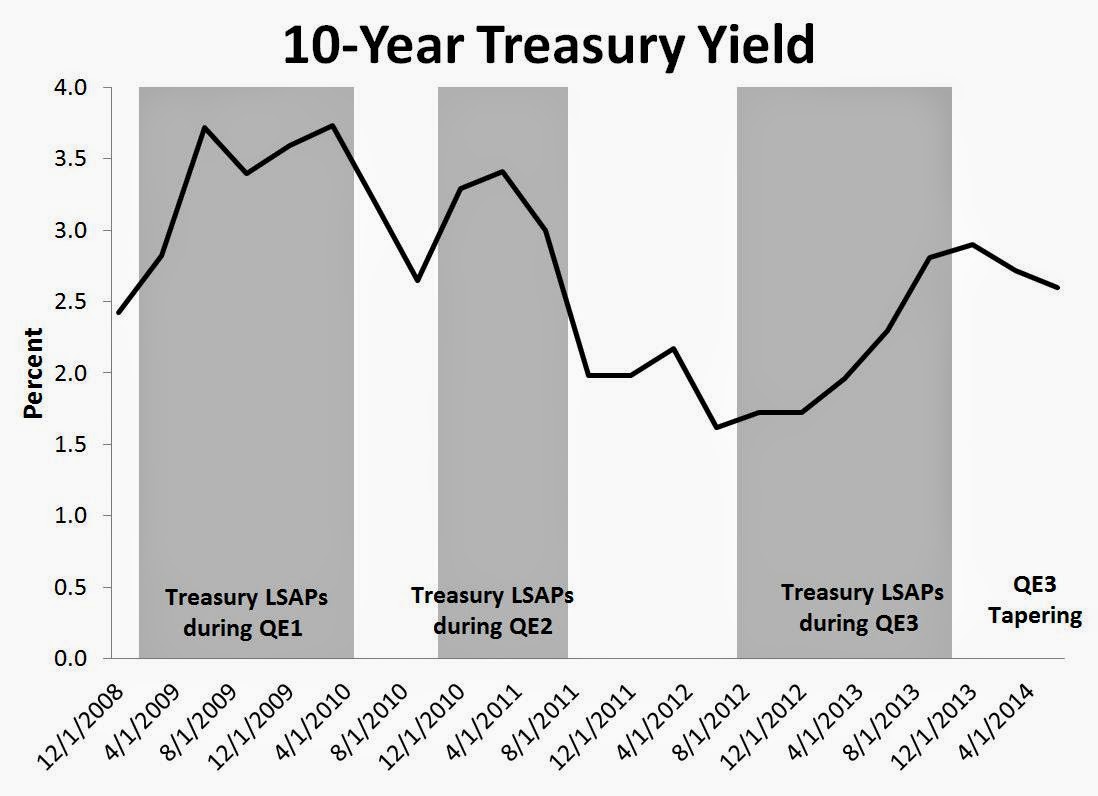 One way to explain this outcome is that the QE programs actually raised expected economic growth and that pushed up treasury yields. Okay, says the skeptic, maybe the Fed's QE programs raised the expected path of short-term interest rates by raising expected economic growth. But surely the Fed's large scale asset purchases (LSAPs) lowered the term premium portion of long-term yields. That was, after all, the deeper theory behind the claims that QE would make long-term interest rates fall.  Even if interest rates overall went up, the term premium must have fallen. Using the Adrian, Crump, Moench (2014) and Kim and Wright (2005) data, we see the opposite actually occurred. Term premiums tended to rise during QE programs. 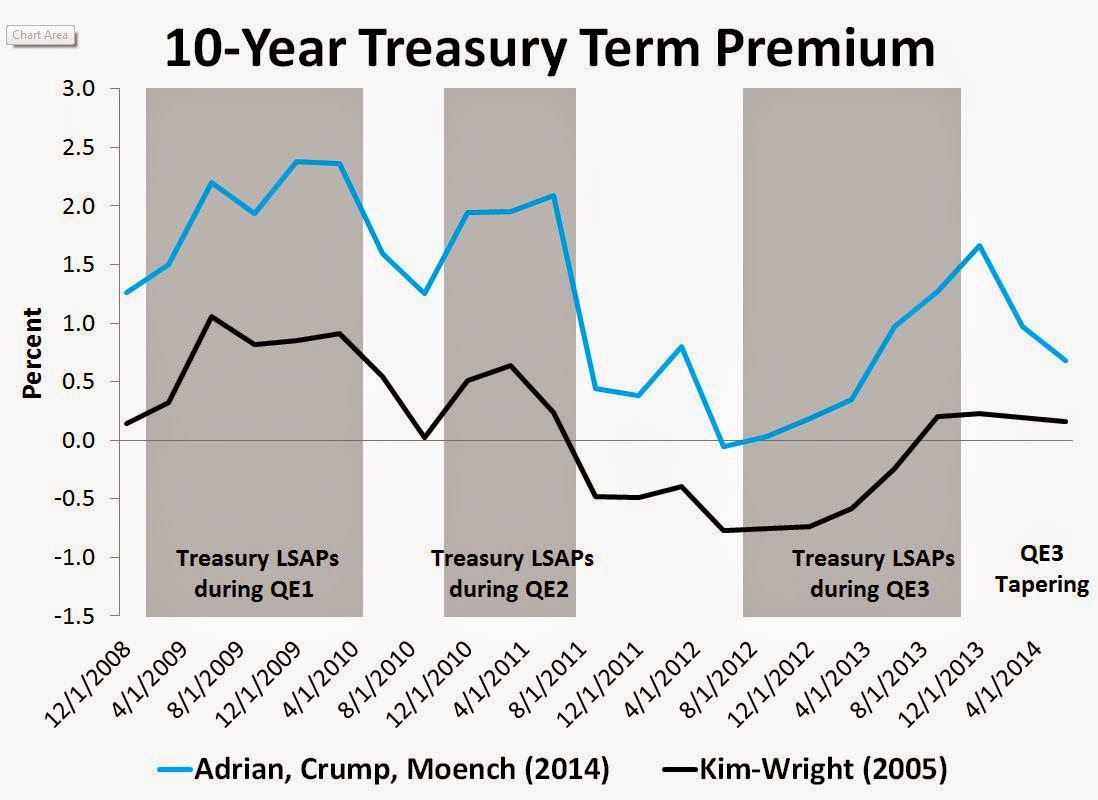 It is particularly interesting to see the term premium fall so much between QE2 and QE3. It is as if the term premium needed QE to stay propped up. Here is one possible explanation. The QE programs increased the economic outlook and that, in turn, reduced the risk premium on other assets. Investors, therefore, were more willing to hold other higher-yielding assets and this meant they had to be compensated more to hold the low-yielding treasuries. Likewise, between QE programs, risk premiums on other assets rose and caused investors to flock back to treasuries. This migration caused the term premium to fall between QEs. In any event, this data indicates the Fed failed at lowering the term premium.

So claims of the Fed enabling the large budget deficit are not supported in the data. An alternative explanation that is that the overall increased appetite for safe assets over the past five years was the true enabler. And here is where I think the Fed is responsible. By failing to restore full employment to the economy, the Fed has allowed risk premiums to stay elevated and interest rates on safe assets to stay depressed.  In fact, the 10-year treasury real risk-free interest rate (the nominal treasury yield minus expected inflation minus the term premium) closely tracks the the CBO's output gap as seen below: 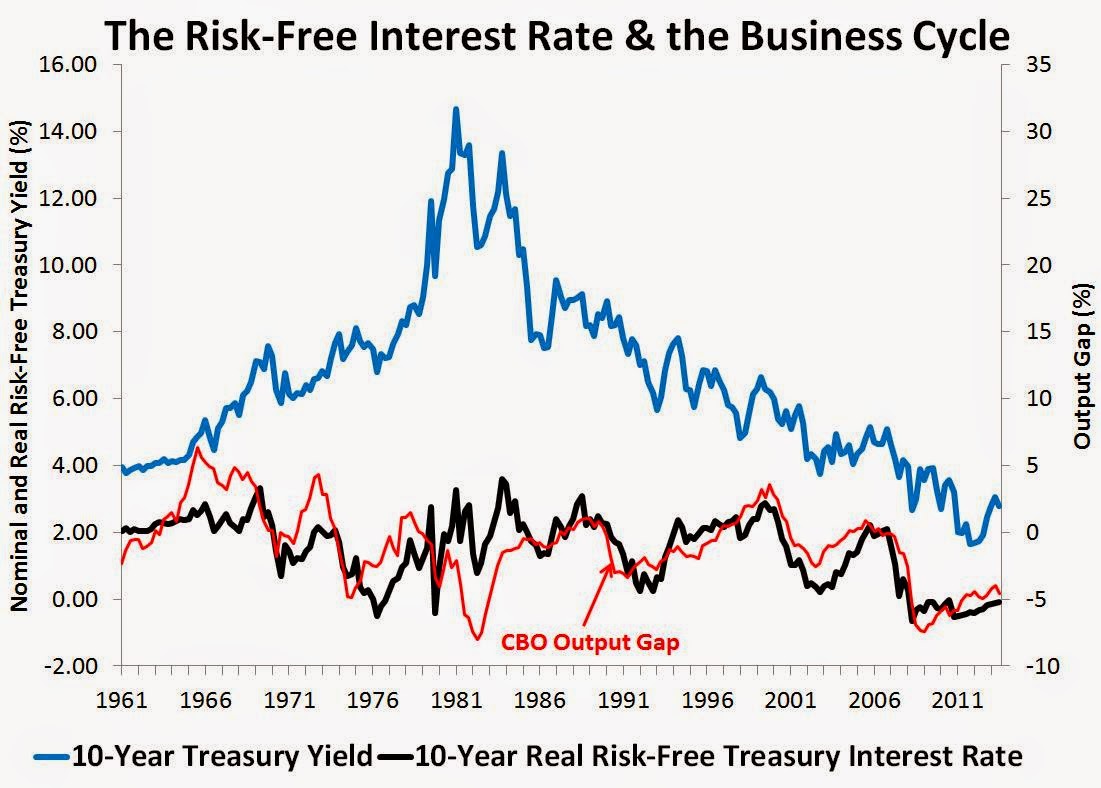 Now one could conclude from this that the QE programs did not make that much difference. I disagree. The evidence above suggest the Fed at least put a floor under long-term interest rates (and by implication a floor under the economy) with its QE programs. To know for sure how different the economy would have been in the absence of QE one needs to do a counterfactual. Here is my modest attempt at one and here is one by Barry Ritholtz. In both cases the economy would been a lot worse off without it.

So goodbye QE. It was good knowing you.

PS. Yes, the Fed's QE programs were flawed. They were very ad-hoc and designed in a way that would prevent them from restoring full employment. But again, the alternative may have been far worse.
Posted by David Beckworth at 12:52 PM