Revisiting the Great Experiment of 2013

Now that the revised 2013 GDP numbers are out it is worth revisiting the debate surrounding the 'Great Experiment' of 2013. It started with Mike Konczal firing this opening salvo at Market Monetarists in early 2013:

In late 2011, the economist David Beckworth and the writer Ramesh Ponnuru wrote an editorial in the New Republic on how “both liberals and conservatives are wrong about how to fix the economy.” How were they wrong? Conservatives were wrong because, contrary to common belief on the right, the Federal Reserve wasn’t in fact doing enough to boost the economy. Liberals, however, were wrong in opposing austerity and calling for more fiscal stimulus in the form of stimulus spending or temporary tax cuts.

In Beckworth and Ponnuru’s view, the Federal Reserve still had plenty of room to boost the economy. Not only would fiscal tightening be good over the long haul, but it would force the Fed to act. And they argued that as long as the Fed is working to offset austerity, the country “won’t suffer from spending cuts.

We rarely get to see a major, nationwide economic experiment at work, but so far 2013 has been one of those experiments -- specifically, an experiment to try and do exactly what Beckworth and Ponnuru proposed. If you look at macroeconomic policy since last fall, there have been two big moves. The Federal Reserve has committed to much bolder action in adopting the Evans Rule and QE3. At the same time, the country has entered a period of fiscal austerity. Was the Fed action enough to offset the contraction?

Paul Krugman liked Konczal's idea of 2013 being an experiment to test ideas and chimed in:

Some observers predicted that this fiscal tightening might costs as many as 700,000 jobs. Market monetarists like Scott Sumner and myself were more optimistic. I agreed at the time that this development would provide a kind of natural experiment to test whether monetary policy could offset fiscal at the zero lower bound (ZLB), but cautioned that it was only a test of how effective QE3 would be against the sequester. It was not a test of whether a NGDP level target, my ideal, could restore full employment at the ZLB. Scott Sumner made a similar guarded reply. Still, the 'Great Experiment' was on and thanks to Konczal and Krugman our views were to be publicly put to the test in 2013.

An important question that came up in this experiment was how best to measure fiscal austerity. It is not that easy since one has to control for the influence of the business cycle. Fortunately, Paul Krugman explained how to do it:

Now, measuring austerity is tricky. You can’t just use budget surpluses or deficits, because these are affected by the state of the economy. You can — and I often have — use “cyclically adjusted” budget balances, which are supposed to take account of this effect. This is better; however, these numbers depend on estimates of potential output, which themselves seem to be affected by business cycle developments. So the best measure, arguably, would look directly at policy changes. And it turns out that the IMF Fiscal Monitor provides us with those estimates

This IMF measure includes all levels of government--local, state, and federal--when calculating the government balances. It is a thorough measure. Below is a figure of it based on the latest IMF Fiscal Monitor. It shows that the cyclically-adjusted deficit as a percent of potential GDP started getting smaller in 2010. Structural fiscal policy, in other words, was contracting well before 2013. 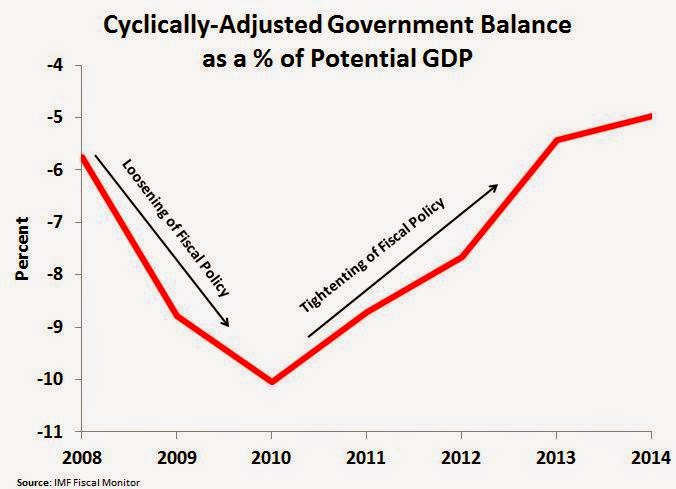 According to Konczal and Krugman, this tightening of fiscal policy should slow down aggregate spending. So did it? The figure below shows total dollar spending in the United States as measured by nominal gross output (it includes all transactions, not just the final ones used in GDP). It shows no signs of a spending slowdown since fiscal tightening started in 2010. And none in 2013 either, the year of the 'Great Experiment.' Similar results are fond by looking at nominal GDP. 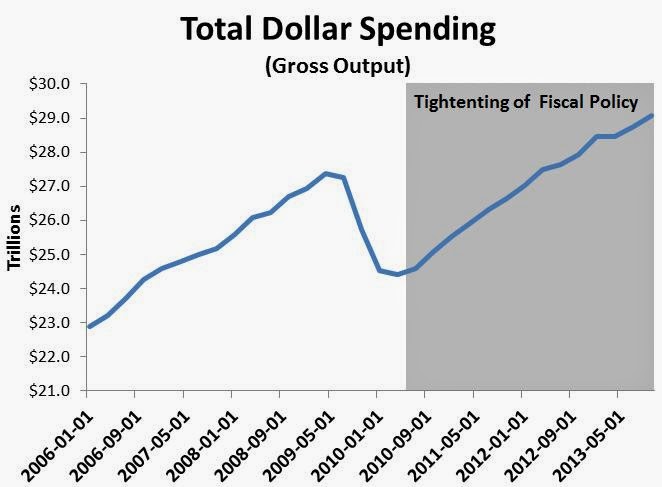 The newly revised numbers for GDP in 2013 further confirm these observations. They came in stronger than previously reported. As Scott Sumner notes,these new numbers scream "fail" for the Keynesian view. Monetary policy was easily able to offset the 2013 fiscal austerity despite the ZLB.

So what are the lessons? First, this 'Great Experiment' of 2013 revealed the potential of monetary policy even at the ZLB. It suggests the Fed could have done more over the past five years to restore full employment. Alas, it did not!

Second, this experiment also suggests that measuring the fiscal multiplier can be tricky. In this case, someone might think the multiplier was negative in 2013 since tightening fiscal policy was followed by sustained economic growth. Along the same lines, the true impact of the President Obama's American Recovery and Reinvestment Act of 2009 is hard to measure since had it not happened it is likely the Fed would have done more.

Third, the economics blogosphere is a great place to propose ideas and begin hashing them out. Mike Konczal's keen observation that 2013 was providing a natural experiment of sorts and the discussion that it created is a great example. I have learned a lot on many issues and am grateful for this medium.
Posted by David Beckworth at 8:49 PM