The Other Important Legacy of World War One

One hundred years ago today World War I (WWI) began. On this anniversary there has been a lot of discussion about the war and its implications for the century that followed. Today, as I traveled, I got to listen to one such discussion on the NPR program, On Point. The host, Tom Ashbrook, interviewed several historians and a commentator about the war. It was a really interesting show and I learned a lot, like how the problems in Middle East and Ukraine can be traced in part to the boundaries that were drawn after the war. I could not have asked for a better traveling partner.

There was, however, an important point I did not hear discussed on the show and could not find on other commentaries commemorating WWI: the important legacy this war had on the international monetary system. WWI shattered the classical gold standard of 1870-1914, which had worked relatively well, and replaced it with an incredibly flawed one that is attributed by many to the severity and global reach of the Great Depression in the 1930s. And the Great Depression, according to some historians, was the key catalyst that brought the Nazis to power. Here, for example, is Barry Eichengreen and Peter Temin:

Rivers of ink have been spilled over the causes of the Nazi rise to power. Studies have championed and refuted competing hypotheses about the relationship between the German economy and the votes for the Nazi party. At some level, however, there cannot be any doubt that the Nazis were the party of the Depression. They were a fringe group in the 1920s and grew to electoral prominence only in 1930 when economic conditions deteriorated. They gained even more seats in the Reichstag in the first election of 1932, but lost seats in the second election later that year as economic conditions appeared to improve. Had that improvement come earlier, a new study using panel data shows clearly that the Nazi vote would have been smaller.18 We do not have a model of the political process that tells us how weak the electoral support for the Nazis would have had to be to significantly affect the political maneuvering among the leaders of the Weimar Republic. But almost any model would say that better economic conditions would have decreased political support for the Nazis and therefore the probability that Hindenburg would have asked Hitler to be chancellor.

So far all the problems WWI created, the flawed interwar gold standard was probably one of the the more important ones. It led to the Great Depression which, in turn, guaranteed the rise of the Nazis and another world war. The big lesson, then, is getting the international monetary system right matters a lot.

Update: Francesco Lenzi shares this interesting picture on twitter. It shows that the Great Depression, not the Weimar hyperinflation, was behind Hitler's rise. 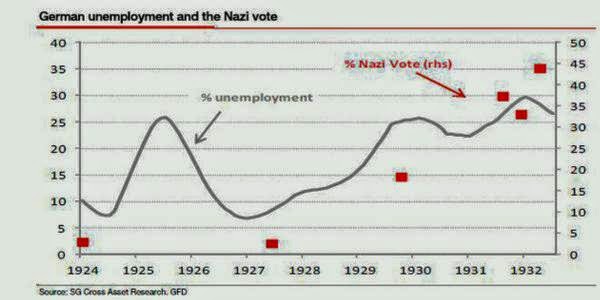 Related
The Gold Standard Was an Accident of History
Posted by David Beckworth at 7:00 PM