Fool Me Once, Shame on You; Fool Me Twice Shame on Me.

Update: Here is the second half of my interview which aired on Tuesday.

On Friday I was interviewed by Erin Ade on Boom Bust. We discussed why the Eurozone is not an optimal currency area--low labor mobility, limited fiscal transfers, differing regional business cycles--and why this means a one-size-fits all monetary policy is bound to make problems for this monetary union.

This discussion was a follow-up to a recent post where I illustrated the challenges of a one-size-fits-all monetary policy by plotting Taylor rules for the Eurozone's core and periphery economies. These Taylor rules prescribe very different interest rates for these two regions since the Euro's inception, yet there is only one interest rate target. What to do? The chart below, which was used on Boom Bust, reveals what the ECB did in practice: 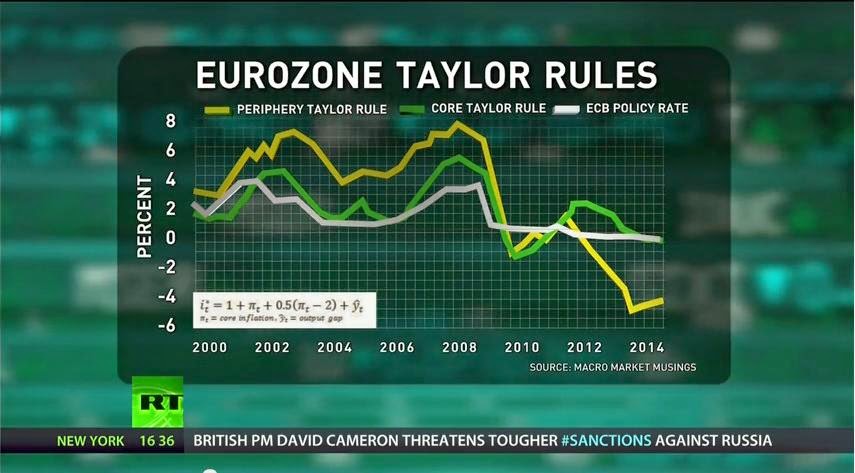 Note that the ECB policy rate (grey) and the core Taylor rule rate (green) track each other relatively closely. This means the ECB adjusted its interest rate target in a manner more consistent with the core economies. It also means the ECB policy was destabilizing for the periphery. For example, it was far too easy for the periphery prior to 2008--helping fuel the run up in debt, soaring asset prices, and current account deficits in those economies--while after that time it has been far too tight. For the core, ECB policy has been about right since 2010. This explains, in part, the ECB's reluctance to ease since then.

This became apparent in 1992 when Germany, worried about overheating from the spending on its reunification, decided to tighten monetary policy. To maintain their pegs, the EMS countries had to follow suit and tighten too. For many countries, though, this was hard to do because their economies were already weakening. Monetary policy, in other words, was tightening in order to stabilize the core economy even though the periphery needed easing. In the United Kingdom and Italy the pain of this tightening proved to much and they were forced to leave the EMS. Other periphery countries like Spain and Portugal limped along.

So the problems in the Eurozone periphery since 2010 are an eerie Deja Vu of the 1992 EMS experience. In hindsight, then, it seems that the periphery should have known better than to try a second monetary marriage with the core economies. As the saying goes, fool me once shame on you; fool me twice shame on me. The core economies continue to have the upper hand when it comes to the conduct of monetary policy in the Europe. And it does not seem that this will change anytime soon. This is a lesson the periphery needs to learn.

Update: What this all means is that even if the current Greek crisis gets resolved, there will be more crises in the future for the Eurozone. It is unlikely that peripheral conturies will undergo the structural change needed to make them succeed in a Eurozone whose monetary policy favors the core. So at some point it seems likely that the history of the UK and Italy leaving the EMS in 1992 will be repeated in the Eurozone.
Posted by David Beckworth at 11:23 PM