Paul Krugman is frustrated (my bold):

In my own case, I’d guess that about 80 percent of what I’ve had to say about macroeconomics since the crisis was prefigured in my 1998 liquidity trap paper, which was classic MIT style — a stylized little model backed by and applied to real-world events, with lots of data used simply. (Seriously, skim that piece and you’ll see why I sometimes seem so frustrated: People keep rolling out arguments I showed were wrong all those years ago, or trotting out arguments I made back then as something new and somehow a challenge to conventional wisdom.)

Here is a carton figure from an earlier post where I manage to depict Krugman's frustration. Look closely at his t-shirt, it says it all. To be clear, I agree with the key point of Krugman's 1998 paper: for monetary policy to have a meaningful effect on a depressed economy it has to commit to permanent monetary injections. And that is something the Fed failed to do over the past six years. 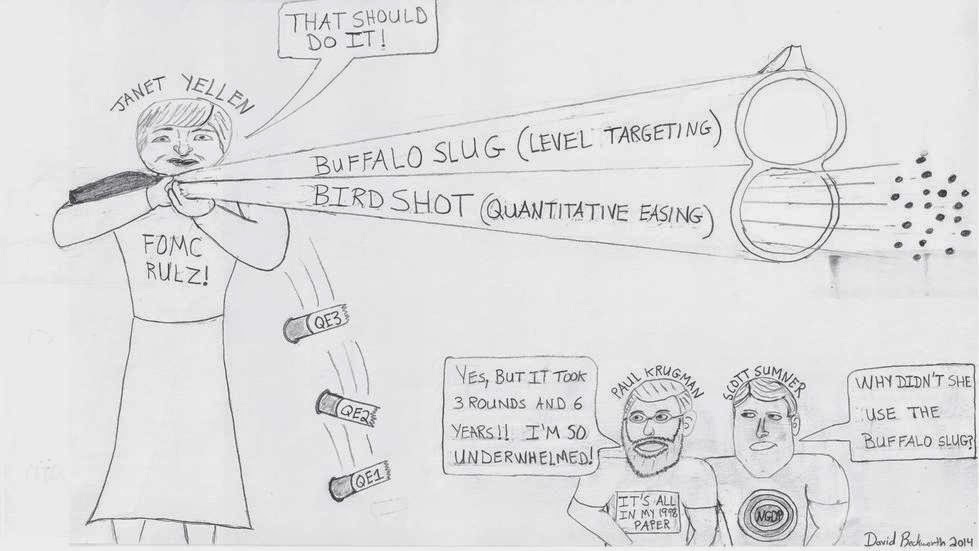 P.S. Here is the shirt Scott Sumner is wearing. You can purchase it.
Posted by David Beckworth at 2:01 PM