Formally re-elected head of the ruling party, Prime Minister Shinzo Abe said Thursday he has set out three new goals for “Abenomics” and will target a 20 percent increase in gross domestic product to ¥600 trillion.

The details are murky, but what is clear is that for this plan is to work it will require a credible commitment to permanently expand the monetary base, as shown by Michael Woodford, Paul Krguman, William Buiter, and many others. But was not this already supposed to be happening? Was not Abenomics to permanently double the monetary base? Recall this figure of Japan's monetary base: 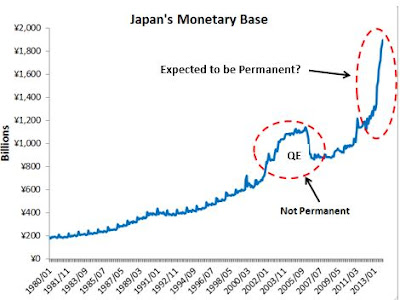 Some observers like Hausman and Weisman worry that Abenomic's monetary base expansion is not credible and therefore not permanent. If so, then this latest Abe goal of raising the level of NGDP by 20% may not be credible either.

Or maybe not. One way to check whether the monetary base expansion is expected to be at least somewhat permanent is to see whether nominal spending has been rising. If Abenomics is just a larger version of Japan's 2001-2006 QE program where the monetary base expansion was temporary and did little to raise aggregate demand, then we should expect to see similar patterns in nominal expenditures under Abenomics. So what has actually happened? 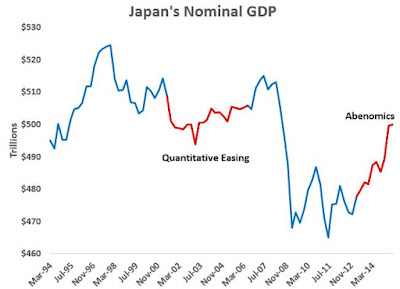 The figure above shows that Abenomics compared to the 2001-2006 QE program has been fairly successful in generating aggregate demand growth. This suggests that the monetary base growth is seen at least as somewhat permanent.


Raising the  level of NGDP from ¥499 to ¥600 trillion is a far bigger task. Below are three different growth paths for NGDP to reach its new target: a three-year path, a five-year path, and a seven year path. Although no official time table has been set for hitting the ¥600 trillion target, many observers are mentioning 2020 as the target date. As Simon James Cox notes, this time frame  seems to be corroborated by Japan's Cabinet Office. This would correspond to the five-year path. If NGDP were to follow the trend growth of NGDP during Abenomics it would follow the seven-year path. 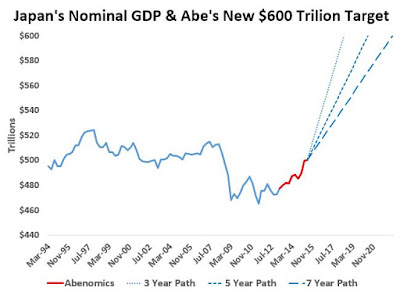 It is worth repeating, as I often do, that the more credible this policy becomes the less need there is for additional growth in the monetary base. If the public perceives the government is firmly committed to permanently expanding the monetary base then its velocity will grow as the public tries to rebalance their portfolios away from it. This increase in monetary base velocity, then, will do much of the heavy lifting in raising aggregate demand growth.

The question is whether a 20% increase in NGDP is a credible goal. It is one thing for Abenomics to gain some credibility, but a 20% NGDP increase in five years? I want to believe, but I am a bit skeptical.

Most of the NGDP growth completed under Abenomics has resulted in higher inflation rather than in higher real GDP growth. The figures below show the inflation rates for the GDP deflator and the core consumer prices in Japan. These increases in inflation have not been matched by sustained increases in real growth. Real GDP has average 0.58% year-on-year growth every quarter since 2013:Q1 whereas the deflator has average 0.93% growth. 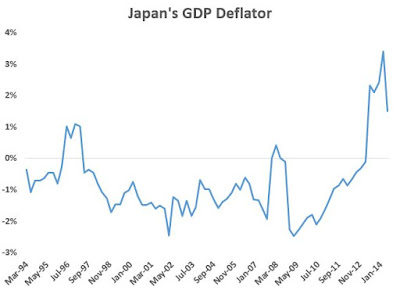 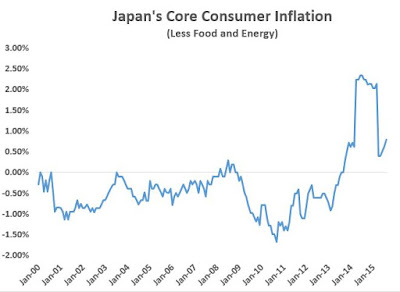 What if the public expected these patterns to continue going forward? That is, what if most of the NGDP growth was expected to result in more inflation? In that case, I suspect the aging population in Japan living off fixed incomes would strongly object to the ¥600 trillion NGDP target. This IMF study lends support to this view. It shows It shows that economies with large numbers of old people tend to experience lower inflation rates. This suggests they  have political influence.

One could argue that this higher level of inflation would reduce real debt burdens, ease excess money demand, lower real rates, and increase real economic activity in a way that has not been seen yet. This may be true, but that these developments have not happened speaks to why a 20% NGDP increase may not be credible. Abenomics may have been tolerated, but would an aging population and others holding government debt tolerate five more years of higher inflation? I am not so sure.

Another issue that complicates matters is that raising NGDP growth alone will not solve all Japan's problems. It has numerous structural problems that need to be addressed. These were supposed to be tackled in third arrow of Abenomics. Not much has happened here and maybe more robust NGDP growth would make it easier to address the structural problems.

I do not want to be too pessimistic here. Abenomics successfully raised NGDP growth compared to the 2001-2006 QE program. That is a real accomplishment and speaks to possibility of doing more. I just worry that a 20% NGDP target in five years might be asking too much given the amount of credibility it requires.

Update: One can view this NGDP credibility problem through the lenses of the fiscal theory of the price level. Below is an excerpt from an earlier post:

Paul Krugman [notes] that there could be too much fiscal credibility. If so, it would be creating a drag on aggregate demand growth (i.e. higher expected future surpluses imply lower velocity today and, in turn, mean lower aggregate demand growth). While this argument may apply to the United States, Krugman is certain it applies to Japan. Here is Krugman discussing the proposed tax hikes in Japan:

What Krugman and Cochrane are saying is that there may be too much fiscal credibility in Japan to allow the public to believe current and future monetary base expansions will be permanent. The interesting question, then, is whether the announcement of this NGDP target changes that credibility.

Update II: See John Cochrane's post on Japan. He briefly responds to this post in an update.
Posted by David Beckworth at 1:40 PM