Doubling Down on Abenomics

So it appears the Bank of Japan (BoJ) had already doubled down on Abenomics before the prime minister announced a new NGDP level target. In late 2014, the BoJ said it would increase the growth of the monetary base and by implication the number of assets it would purchase.

Here is the original BoJ announcement on Abenomics in early 2013 (my bold):


The Bank will achieve the price stability target of 2 percent in terms of the year-on-year rate of change in the consumer price index (CPI) at the earliest possible time, with a time horizon of about two years.In order to do so, it will enter a new phase of monetary easing both in terms of quantity and quality. It will double the monetary base and the amounts outstanding of Japanese government bonds (JGBs) as well as exchange-traded funds (ETFs) in two years, and more than double the average remaining maturity of JGB purchases...The Bank of Japan will conduct money market operations so that the monetary base will increase at an annual pace of about 60-70 trillion yen.1

And here is footnote one:

The BoJ got close. The monetary base hit 267.4 trillion yen at the end of 2014. The BoJ did not, however, hit its inflation target. So it announced in October, 2014 it would increase how fast the monetary base would grow:

[T]he Bank of Japan decided upon the following measures.

So the BoJ decided to double down its bets on Abenomics by growing the monetary base an additional ¥10 trillion a year for a total of  ¥80 trillion per annum. This non-trivial pick up in growth can be seen in the figure below under the 'Abe II' label: 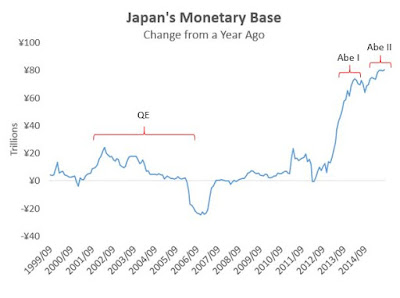 So maybe Japan is more determined than we realized to make this reflation experiment work. Maybe there is more credibility to Shinzo Abe's new NGDP level target than we first imagined. Abenomics has, after all, consistently raised aggregate demand as noted in my last post. The key is not to repeat the mistake made with Japan's first QE program by reversing the monetary base growth as is seen in the figure above.

P.S. Both the core inflation and rate deflator inflation rate show sustained rises. This is not good for Neo-Fisherism.
Posted by David Beckworth at 12:05 PM