Over the past  six years the Fed's preferred measure of the price level, the core PCE deflator, has averaged 1.5 percent growth.  That is well below the Fed's explicit target of 2 percent inflation. Why this consistent shortfall?

Some Fed officials are asking themselves this very question. A recent Wall Street Journal article reporting from the Jackson Hole Fed meetings led with this opening sentence: "central bankers aren't sure they understand how inflation works anymore". The article goes on to highlight some deep soul searching being done by central bankers in the Wyoming mountains. It is good to see our monetary authorities engaged in deep introspection, but let me give them a suggestion. Dust off your revealed preference theory textbooks and see what they can tell you about the low inflation of the past six years.

To that end, and as a public service to you our beleaguered Fed officials, let me provide some material to consider. First consider your inflation forecasts that go into making the central tendency consensus forecasts at the FOMC meetings. The figures below show the evolution of these forecasts for the current year, one-year ahead, and two-years ahead. There is an interesting pattern that emerges from these figures as you expand the forecast horizon: 2 percent becomes a upper bound. 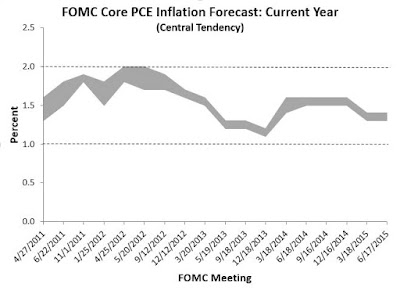 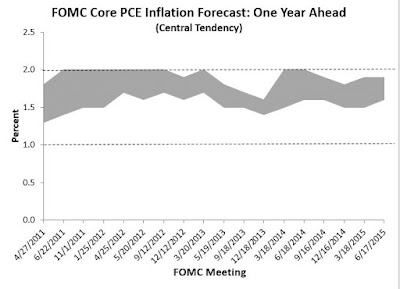 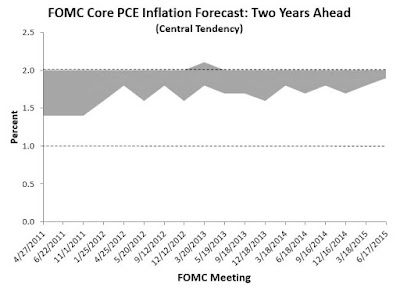 So the first insight from revealed preferences is that you and your fellow FOMC officials have been consistently looking at an upper bound of 2% on core PCE inflation. Now if we add to this observation the fact that the FOMC has meaningful influence on inflation several years out, then these revealed preference are saying you want and expect to get an inflation upper bound of 2%.

Your chair, Janet Yellen, conceded this point in the press conference following the December 2012 FOMC meeting:

Now an upper bound means there can be activity below it. And we see just that that in your inflation projections. Collectively, then, all of this revealed preference evidence suggests that you and your Fed colleagues do not have a 2% inflation target, but rather an inflation corridor target. Based on your above forecasts your corridor target appears to be somewhere between 1% and 2%.

We can get a better sense of where this inflation corridor target lies with additional revealed preference evidence. This evidence is found in the following figure which shows core PCE inflation and the timing of your QE programs. The figure suggest that you and your fellow FOMC members tend to start QE programs after core inflation had been drifting away from the 2% upper bound and you do so in a manner that prevents it from drifting below 1% for very long. (Based on this reading, you all are likely to change tack soon if core inflation does not stop drifting toward 1%. ) 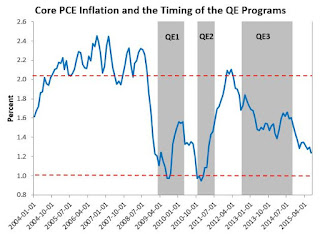 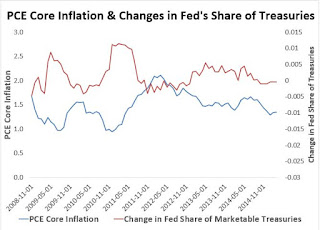 So rest easy dear Fed official. No need for any existential angst. According to revealed preferences, you are still driving core inflation--which ignores supply shocks like changes in oil prices--it is just that you have a roughly 1%-2% core inflation target corridor rather than a 2% target. So even though you may not realize it, you are doing a bang up job keeping core inflation in your target corridor.
Posted by David Beckworth at 10:38 AM