Time Traveling with the Fed

Imagine we travel back in time to the second quarter of 2009. We stop by the Federal Reserve and reveal to Fed officials that the recession has now bottomed out. They are elated until we disclose that the Great Recession will be followed an anemic recovery for the next seven years. We share how ZIRP, forward guidance, and successive rounds of QE will fail to create an robust recovery and this leaves Fed officials aghast.

Reeling from shock, they ask what they should do instead of these policies. We inform them of the argument for a NGDP level target made by Scott Sumner, Christina Romer, and Michael Woodford. We also inform them that they should signal the seriousness of their intent to do so by making an arrangement with the Treasury Department to back up their actions with contingent 'helicopter drops' should the Fed fail to hit the NGDP level target.

The Fed agrees with our assessment and decides to spend its political capital on the NGDP level target proposal--instead of using it on ZIRP, forward guidance, and QE programs--and gets the backing of Congress and the Treasury Department. The great macroeconomic experiment begins.

So what would happen next in this counterfactual history? How would the economy respond to these combined efforts of monetary and fiscal policy starting in mid-2009? No one can answer these questions with certainty, but it is likely that at a minimum there would be temporarily higher inflation.

The two figures below lend support to this understanding. They come from a paper I am currently working on where I run a counterfactual forecast of inflation starting in mid-2009. The forecasts are based on three different paths of NGDP returning to its pre-crisis trend: a two-year path, a three-year path, and a four-year path. The first figure shows the three NGDP return paths and the second figure shows the inflation forecasts associated with these paths: 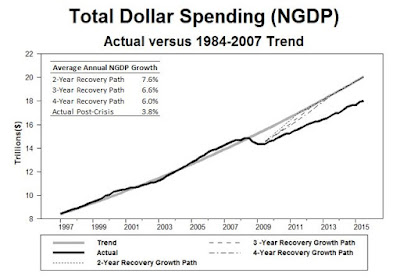 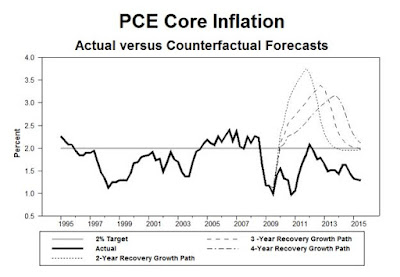 Although temporary, inflation is notably higher than both the actual inflation rate that occurred and the 2% target rate under each of the counterfactual NGDP return paths. The inflation rate would get as high as 3.8% for the two-year path and 3.2% for four-year path. Over all counterfactual paths inflation would average around 2.5% since mid-2009, compared to actual average of 1.5%.

These numbers are just counterfactual forecasts, but they demonstrate a key reason why the current monetary regime could never have generated the 'catch-up' aggregate demand growth needed to offset the 2008-2009 crash in nominal spending and return it to its pre-crisis path: it would require higher than 2% inflation for a few years. And that is simply intolerable in the current environment.

The Fed, Congress, and the body politic at large have come to view 2% or less inflation as the norm for advanced economies. Any violation of it--even if temporary and part of a systematic approach like the NGDP level target above--would be viewed as an egregious affront to civilization. Just look at some of the flack former Fed Chair Ben Bernanke got on this issue or the exchange (see last part) between him and former Senator David Vitter on the question of raising the inflation target.

This means that no matter how much QE or forward guidance the Fed engaged in, it would always be done in a way that kept inflation and, as a result, aggregate demand growth in check. This is the Fed's dirty little secret. This understanding also means that no matter how much fiscal policy was done, it too would only be effective up to the 2% inflation threshold. This is the Penske problem with modern macroeconomic policy: it relies on an engine governor rather than cruise control to regulate the speed of the economy. It is time for level targeting.