Christina called for the Fed to adopt a nominal GDP level target that would restore aggregate demand to its pre-crisis growth path. Instead, we got a regime change that has effectively lowered the growth rate and the growth path of aggregate demand. This regime change, in my view, is behind the apparent drop in trend inflation that Greg Ip recently reported on in the Wall Street Journal.

It is not easy to change trend inflation--just ask Paul Volker--but the Fed and other forces seemingly accomplished just that over the past decade. Since the end of the crisis, the average inflation rate on the Fed's preferred measure of inflation, the core PCE deflator, has fallen to 1.5 percent The headline PCE deflator average has fallen to 1.4 percent over the same period. Both are well below the Fed's target of 2 percent.

This persistent shortfall of inflation has received a lot of attention from critics, including me. Lately, some Fed officials are also beginning to see the inflation shortfall as more than a series of one-off events. Governor Lael Brainard's recent speech is a good example of this change in thinking with her acknowledgement that trend inflation may be falling.

Still, there is something bigger going on here that is being missed in these conversations about the inflation rate. A monetary regime change has occurred that has lowered the growth rate and growth path of nominal demand. Since the recovery started in 2009Q3, NGDP growth has averaged 3.4 percent. This is below the 5.4 percent of 1990-2007 period (blue line in the figure below) or a 5.7 percent for the entire Great Moderation period of 1985-2007. Macroeconomic policy has dialed back the trend growth of nominal spending by 2 percentage points. That is a relatively large decline. This first development can be seen in the figure below. 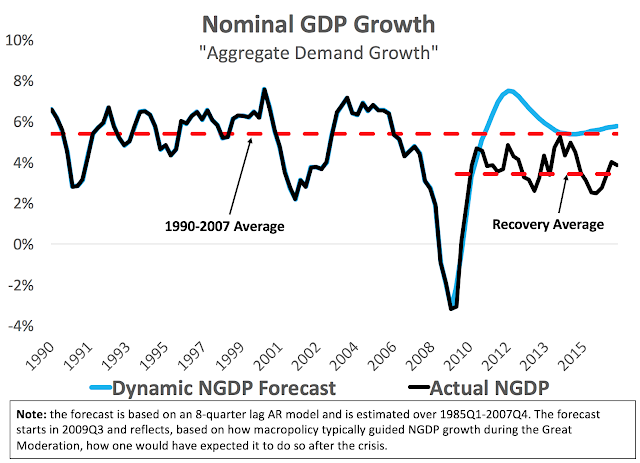 Again, these two developments are, in my view, the real story behind the drop in trend inflation. And to be clear, I think both the Fed's unwillingness to allow temporary overshooting and the safe asset shortage problem have contributed to it. So this is a joint monetary-fiscal problem that has effectively created a monetary regime change.

So yes, we got a monetary regime change, but no it is not the one Christina Romer and most of us wanted.
Posted by David Beckworth at 1:32 PM