This week the Fed is expected to announce it will begin shrinking its balance sheet. Will it matter?

To answer that question it is useful to first recall how and why the Fed's balance sheet was expanded. Between December 2008 and October 2014 the Fed conducted a series of large scale asset purchases (LSAPs) that expanded its balance sheet from about $900 billion to $4.5 trillion. That is an expansion of about 500 percent.

The Fed turned to LSAPs for additional stimulus when its target for the federal funds rate—the traditional tool of U.S. monetary policy—hit the zero lower bound in late 2008. The main theory the Fed used to justify the LSAPs was the portfolio balance channel. It says that because of market segmentation the Fed's purchase of safe assets would force investors to rebalance their portfolios toward riskier assets. This rebalancing, in turn, would reduce risk premiums, lower long-term interest rates, and push up asset prices. This would help the recovery.

LSAPs were supposed to trigger the portfolio balance channel by reducing the relative supply of safe assets to the public. This reduction in safe asset supply to the public can be seen by looking at the growing share of safe assets held by the Fed under the various QE programs. The Figure below shows this development for marketable U.S. treasury securities: 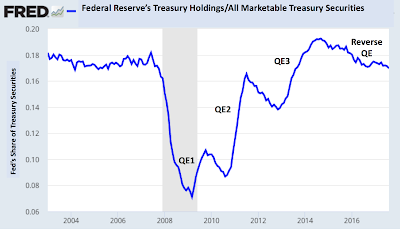 This figure also shows another development that has taken place since late 2014: the Fed's share of treasuries has been shrinking. I call this the Fed's "reverse QE" program. Per the portfolio channel, this should be a passive tightening of monetary policy as the Fed's share of safe assets has fallen. Put differently, this should be portfolio rebalancing in reverse that causes long-term treasury yields to rise.

The figure below, however, shows the opposite has happened under "reverse QE". Other than the Trump bump, 10-year treasury yields have been heading down. Even if we focus just on the ZLB period of "reverse QE"--October 2014 through December 2015--we still see this pattern: 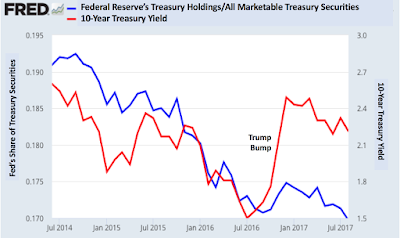 So what does this all mean? It suggests that outside of the 2008-2009 crisis period the portfolio balance channel never really mattered. There are good theoretical reasons for this conclusion as noted by Michael Woodford, John Cochrane, and Stephen Williamson.1 It is not clear, then, that QE2 and QE3 made much difference to the recovery. To be clear, there is some empirical evidence that shows some small-to-modest results for these programs. Even if these results are taken as given, however, most evidence points to this success coming from the signaling channel rather the portfolio balance channel.2

This implies the Fed's shrinking of its balance sheet should not be a big deal. The Fed has been signaling for some time it would start shrinking its balance sheet this year. It even released a detailed plan in June of how it will happen. So there should be no surprises--the Fed is carefully using the signaling channel to keep markets calm. Given this signaling and the lack of a binding portfolio balance channel,  the concerns about the shrinking of the Fed balance sheet causing monetary policy to tighten are mostly noise.

I say mostly noise because there is one potential concern. It is the financial pressure caused by the new regulatory demands of the liquidity coverage ratio running up against the spread between IOER and treasury bills. I wrote about this issue awhile back in an OpEd:

The second reason the scaling back of the Fed's balance sheet may be challenging is that post-2008 regulation now requires banks to hold more liquid assets. Specifically, banks now have to hold enough high-quality liquid assets to withstand 30 days of cash outflow. This liquidity coverage ratio has increased demand for such assets of which bank reserves and treasury securities are considered the safest. So, in theory, as the Fed shrank its balance sheet, the banks could simply swap their excess reserves (that the Fed was pulling out of circulation) for treasury bills (that the Fed was putting into circulation). The challenge, as observed by George Selgin, is that the Fed's interest on excess reserves has been higher than the interest rate on treasury bills. This creates relatively higher demand for bank reserves.

The figure below illustrates this potential problem. It shows the Fed's upper and lower bounds on the federal funds rate and the 1-month treasury bill interest rate. These upper bound is the IOER and the lower bound is the reverse repo rate. The reverse repo rate has (sort of) anchored the 1-month treasury bill yield, but the issue is the spread between it and the IOER. Why would  banks want to give up bank reserves for treasury bills when reserves earn at least 25 basis points more than treasury bills? The Fed will be pushing against this demand when it tries to pull the excess reserves out of the banking system. Good luck wth that. 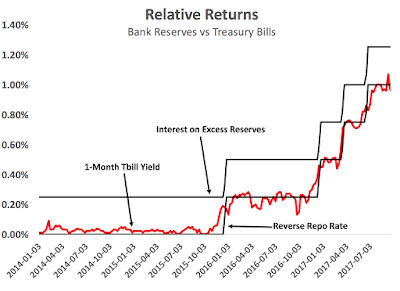 To summarize, we need not worry about the portfolio balance channel kicking into reverse as the Fed begins shrinking its balance sheet. We should, however, worry about the distortions created by the positive IOER-treasury bill yield spread as Fed unwinds its asset holdings. The Fed can fix this problem by equalizing IOER and short-term market interest rates.

1Theoretical Problems with the Portfolio Balance Channel. The portfolio balance channel as envisioned by the FOMC relied on controversial assumptions about segmented markets and the Fed being a more efficient financial intermediary than other financial firms. On the first assumption, if the Fed can truly affect long-term treasury interest rates because the long-term treasury market is segmented from other markets, then by definition actions in the treasury market should not spill over into other markets. Put differently, portfolio rebalancing cannot take place in truly segmented markets. On the second assumption, if the Fed takes duration risk off of private-sector balance sheets via LSAPs, the risk really has not gone away since those long-term assets are now on the Fed’s balance sheet which, in turn, is backed-up by the tax payer. The private sector is still bearing the risk. The Fed, in other words, is not some special financial intermediary that can transform and diversify away the riskiness of the assets it purchases. This is the Modigliani-Miller theorem critique applied to central bank asset purchases as shown by Wallace (1981). Ben Bernanke acknowledged this theoretical tension by famously quipping that the “problem with QE is it works in practice not in theory.”

During the financial crisis the above assumptions were probably reasonable when markets froze up and the Fed become the lender of last resort. So QE1 probably made a meaningful difference. But after the crisis it is hard to make a convincing case for the assumptions holding. That is why QE2 and QE3 probably did not pack much punch. See Stephen Williamson, John Cochrane, or Michael Woodford (p. 61-65) for more on the theoretical problems with the Fed's understanding of the portfolio balance channel.

2The signaling channel is based on the idea that the LSAPs indicate a firm commitment by the Fed to keep interest rates low for a long period that would not be evident in the absence of the LSAPs.
Posted by David Beckworth at 9:57 PM