The Political Economy of Shrinking the Fed's Balance Sheet

Most folks know the arguments for and against shrinking the Fed's balance sheet on purely economic terms. For a good recap of these arguments see Cardiff Garcia, Henry Curr, and Nick Timiraos. There are however, other political economy forces at work that potentially play into the Fed's decision to shrink its balance sheet.

Most folks do not go there because it is a controversial approach. For it takes a more cynical view of government officials. It goes beyond the view of the Fed as a technocratic institution filled with saintly people doing their best to stabilize the business cycles. It recognizes that people are people no matter where they work and are responsive to political incentives. Now to be clear, many good people work at the Fed because they believe in the mission. But to say the mission is the only thing they consider would be naive. Fed officials, like most people, also care about their own well-being. On the margin, this influences their decision making at the Fed.

This political economy critique of the Fed is not a new one. Mark Toma has entire book on the topic. But most observers, including myself, rarely apply it to the Fed. This includes recent discussions about the Fed's decision to shrink its balance sheet.

I wrote an OpEd for The Hill that bucks this trend. It looks at two countervailing political economy forces weighing on the Fed's decision to shrink its balance sheet. The first force incentives the Fed to keep its balance sheet large:

This vast expansion, combined with the introduction of the Fed’s program to pay interest on excess reserves (IOER) to banks, effectively transformed the Fed from a standard central bank into one of the most profitable financial firms on the planet...

Over the past few years, it has averaged near $100 billion in profits. Prior to the crisis, its profits averaged only $25 billion per year. The Fed’s profitability has allowed its budget to grow 4.1 percent per year between 2007 and 2017, compared to 2.4 percent for the federal government.

Given the profitability, prestige and jobs created by maintaining the Fed’s large balance sheet, it will not be painless for the Fed to shrink it.

Yes, the Fed remits most of its profits to the Treasury, but its own budget has grown relatively fast under its large balance sheet as noted above. Here is a chart from the Fed's 2016 annual report that illustrates this development: 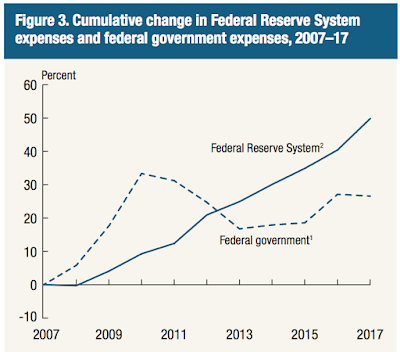 Now some may say this increased spending is due, in part, to the new regulatory responsibilities the Fed has taken on since the crisis. Maybe so, but the Fed has been one of the biggest champions of its new regulatory role. Whether you believe the Fed is a good regulator or not, it has an incentive to expand its budget, prestige, and influence over finance via its regulatory role. Keeping its balance sheet large helps facilitate this expansion. So this is a political economy force for keeping its balance sheet large.

The second force I note in my OpEd incentives the Fed to shrink its balance sheet:

[T]he Fed may be eager to unwind its balance sheet [because] it is bad optics politically. The large expansion of the Fed’s asset holding accompanies a similar-sized expansion of its liabilities. 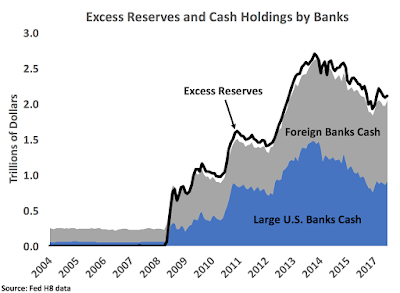 That means foreigners and the U.S. banks bailed out during the crisis are getting most of the interest payments from the Fed. If the Fed’s balance sheet was maintained and short-term interest rates eventually rose to 3 percent (as expected), these banks would get approximately $66 billion a year from the Fed.

To illustrate this point, we again go back to the Fed's 2016 annual report. It shows the Fed's net expenses jumped from roughly $11 billion in 2015 to $17 billion in 2016. That is a huge percentage increase. Almost of all it came from the large IOER payments the Fed had to pay in 2016 because of higher interest rates. Specifically, the IOER payment went from $6.8 billion in 2015 to $12.1 billion in 2016. This is horrible optics: the Fed's expenses are ballooning because it is paying more to foreign banks and the large U.S. banks we bailed out. The Fed can avoid this controversy by shrinking its balance sheet.

As I note in the piece, it is not often that an important government agency voluntarily agrees to actions that will reduce its budget and reach. Yet, the Fed is doing just that by shrinking its balance sheet. It suggests to me that the IOER issue, in conjunction with the other reasons stated by the Fed for shrinking its balance sheet, may be more important than many observers now realize.

P.S. The above assumes the Fed actually goes through with shrinking its balance sheet. I mention in a previous post that the IOER-treasury bill spread if left uncheck may prevent that from happening.
Posted by David Beckworth at 10:59 AM