Employment Conditions at the State Level

We all know had bad employment conditions have become in the United States: 533,000 jobs lost in November and 1,911,000 jobs lost since December 2007. While these numbers are ominous--the United States needs about 100,000 jobs a month just to keep up with the growth in the working age population--they mask some interesting employment patterns at the state level that help shed light on what Robert Reich calls the "new Civil War":

So there's no reason to suppose the good citizens of Kentucky, Tennessee, or Alabama are particularly excited at the prospect of handing over their taxpayer money to competing firms and their workforces.

While Reich focuses on the auto industry, I show below with employment data that more broadly speaking there is no doubt that some Southern and Central states will be subsidizing other parts of the country receiving bailout money, whether for the financial or auto industry, and this may strike some taxpayers in these regions as troubling.

So what does the data show? Let's start with the two states hit hardest by the recession in terms of employment. (They also happen to be the two states with the biggest run up in house prices.) First up is Florida. The numbers on the vertical column are in thousands (Click on figure to enlarge): 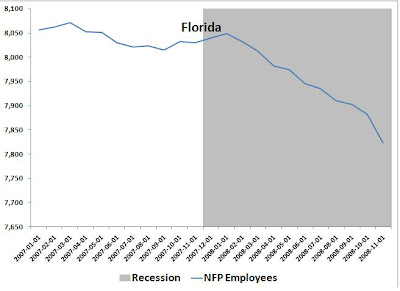 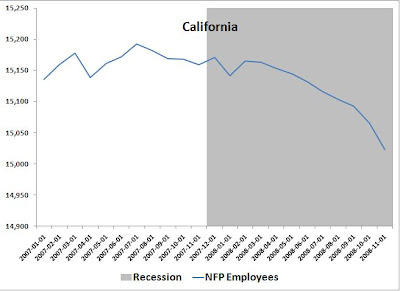 California has lost 147,000 jobs over the same time. So far, this story is consistent with the national view. Let's now look at the two states that have fared the best in terms of employment since December 2007. First up is Texas: 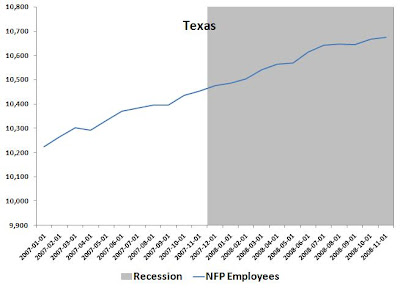 Amazingly, Texas has added 198,000 jobs over this period. Even November saw employment go up by 7,300 jobs. Next up is Oklahoma: 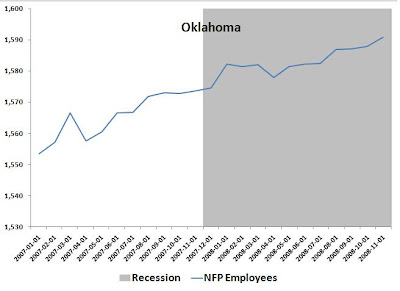 Oklahoma has added 16,300 jobs over this time. In fact, there are a number of states where jobs have been added during the recession. These states, therefore, with stronger economies will be paying taxes for subsidies going to other states. These so called 'fiscal transfers' are important to the smooth function of an optimum currency area, but can still be irritating to those regions paying out more in taxes than they receive in government benefits.

Here are the employment numbers for the rest of the states (Source: BLS): 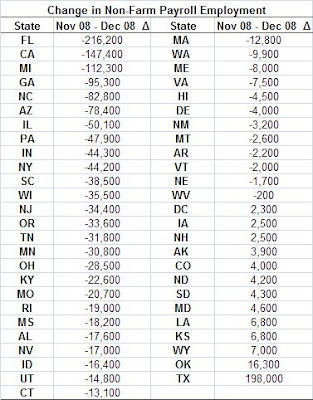 (Note: state level NFP employment is estimated separately from than the national measure,)
Posted by David Beckworth at 2:36 PM