The Real Balance Effect During the Great Depression

Okay, one more posting on the real balance effect and the vertical AD curve during the Great Depression. Yesterday, Paul Krugman set out to demonstrate why the real balance effect did not matter during the Great Depression. His main point was that the impact from even a sharp fall in the price level would not be that consequential for aggregate demand since the monetary base itself is not that large and the wealth effect is similarly modest in size. His post, however, only raises more questions:

(1) Krugman doesn't actually look at 1930s data--which was the original point of contention--but at current data. One, therefore, cannot easily draw conclusions about the real balance effect during the Great Depression based on his posting.

(3) Krugman assumes a standard wealth effect elasticity of 0.05%. This estimate is usually associated with a wealth effect from stocks during normal times, but it is not clear it would be the same for real money balances during periods of intense economic distress. Consumption smoothing is the reason the the wealth effect number is less than one in normal times--individuals would not want to consume all their wealth gains presently but spread it out over time to smooth consumption--but when one's world is collapsing around them, as it was during the Great Depression, are individuals really thinking about consumption smoothing over their lifetime? During such times, individuals get myopic and think more about just making it through the day. This would imply a higher wealth effect elasticity for real money balances. A paper by Karl Case, John Quiqley, and Robert Shiller shows that wealth effects do change based on the the type of wealth. In this paper, the authors discuss some interesting findings on various wealth effects:

Differential impacts of various forms of wealth on consumption have already been demonstrated in a quasi-experimental setting. For example, increases in unexpected wealth in the form of large lottery winnings lead to large effects on short-run consumption (see Imbens, Rubin, and Sacerdote, 1999). Responses to surveys about the uses put to different forms of wealth imply strikingly different “wealth effects” (Shefrin and Thaler, 1988).

The bottom line is that not all wealth effects are the same, even in good economic times. Throw in bad economic conditions and all bets are off on the 0.05% wealth effect number used by Krugman.
So let's put points (1) - (3) to use and construct the real balance effect in 1933--the last year of the Great Contractions--following Krugman's method. First, take a look at M2, real M2, and nominal GDP for this period in the figure below: (Click on the figure to enlarge.) 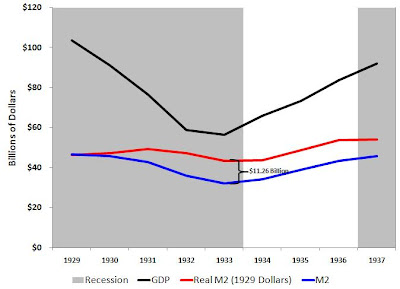 Real M2 is constructed by deflating M2 with the GDP deflator. All data come from here and here. Using 1929 as the base year, real money balance wealth gains were $11.26 billion in 1933. Using Krugman's 0.05% wealth effect number times the $11.26 billion, we get $0.563 billion which is about 1% of nominal GDP ($56.4 billion) in 1933. If we assume a multiplier of 2, as did Krugman, then the real balance effect raises GDP by about $2 billion or about 2%. This non-trivial increase suggests there was at least some downward slope to the AD curve.

But wait, what if my contention that Krugman's 0.05 wealth effect elasticity is on the low side is correct? Then there would be even a larger gain to GDP. Using the same approach as above, here are some possible scenarios using slightly higher wealth effect numbers:

Again, when people are living day-to-day they are probably not thinking about consumption smoothing, but rather are spending any by any means possible, including their wealth gains. Consequently, if anything these numbers are probably on the low side. Now, this analysis, is far from complete, but at a minimum it shows that a meaningful real balance effect was possible during the 1929-1933 downturn. These results, in conjunction with Tyler Cowen's point that an infinite liquidity preference is needed here, make it hard for me to believe there was a vertical AD curve during the Great Contraction.

Update 1: ECB in the comments notes a flaw in my analysis: the real balance effect should only apply to outside money since it only--and not inside money like M2--is a net asset to the private sector. This means my analysis overstates the real balance effect. It also means Krugman was correct to use the monetary base. See here for more on this point.

Update 2: Based on the flaw mentioned in update 1, I redid the analysis using Friedman & Schwartz's monetary base numbers. Using 1929 as the base year, one finds a real money balance gain of $2.85 billion by 1933. Again, using Krugman's multiplier of 2 and allowing for different wealth effect elasticities, here are some scenarios: 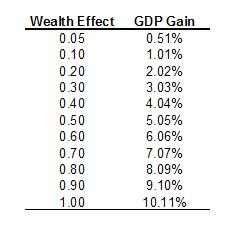