Steve Randy Waldman has been thinking about the Fed and questions its policy of paying interest on reserves at this point in time:

[T]he core rationale for paying interest on reserves has disappeared entirely. Originally, the Fed wanted the power to pay interest on reserves so that it could expand its balance sheet to pursue "stability" goals without stoking inflation by letting the short-term interest rate fall to zero. Now the short-term interest rate has fallen to zero, and the dominant concern is that we are in a "liquidity trap". Yet we are still paying the banks 25 basis points to hold this freshly created money at the Fed. James Hamilton, towards the end of his piece, points out that this is counterproductive. I want to point out that it is also obscene.

I agree with Waldman and Hamilton and have said so before. The easy way to make the case for eliminating the interest payment on excess reserves is to simply look at the money multiplier as I did in this previous posting. There, I showed the money multiplier using MZM as the broad measure of money and the St. Louis Fed's monetary base measure. (See here for why MZM is used over M1 or M2) The data were on a bi-weekly basis. Here I have updated the figure through the week ending December 8, 2008 (Click on figure to enlarge): 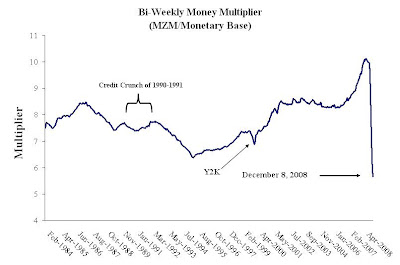 Last time I posted this figure the money multiplier had declined, but still had a higher value than in most of the previous years. Now it is far below the previous years' values. This is not the picture one would want to see when conducting a program of quantitative easing.
Posted by David Beckworth at 10:13 PM