A Question for Paul Krugman, Tyler Cowen, and Felix Salmon

Paul Krugman, Tyler Cowen, and Felix Salmon are discussing the implications of the claim that "the worst of the crisis is hitting states that largely didn’t experience a housing bubble." This claim, however, is based only on recent changes in unemployment rates. If one looks at changes in NFP employment at the state level since the beginning of the recession then there is a closer connection between the housing bubble and the states being hit the hardest by the crisis. There also emerges from this data a clear geographical part of the country that appears to be relatively unscathed by the crisis.

First, take a look at the change in the BLS state-level NFP employment for the period of December 2007 - November 2007 (See here for more on the data). 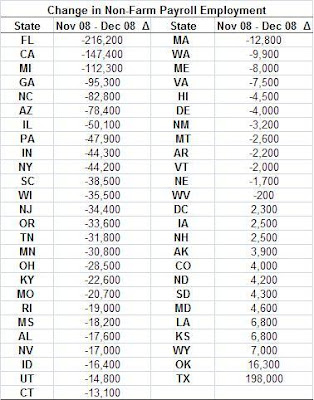 Note that the two hardest-hit states in terms of employment also happened to be ones with some of the biggest increases in home prices: FL and CA. The two states who have gained the most jobs over this time also happened to miss most of the run up in home prices: OK and TX. Now these are only the extreme cases, but they do indicate that there is some relationship between regional house prices and the regional impact of the economic crisis.

This map (source: St. Louis Fed GeoFred) indicates that the energy belt seems to be weathering this crisis far better than the rest of the country. This observation needs explaining. So Paul, Tyler, and Felix what is your story for this observations and does it have any implications for policy?
Posted by David Beckworth at 1:17 AM