The Inadequacy of the Balance Seet Recession View

Thanks to this David Leonhardt article, the balance sheet recession view is once again getting much discussion.  This view holds that households acquired excessive amount of debt during the housing boom, the value of their assets plummeted during the crash, and now their balance sheet are in need of great repair.  Consequently, the U.S. economy is undergoing a great deleveraging cycle that is slowly restoring household balance sheets.  Some take this view to also mean that only time can heal the wounds of a balance sheet recession.
I don't like this view for two reasons.  First, it is at best an incomplete story.  For every household debtor deleveraging there is a creditor getting more payments.  Yes, household debtors have cut back on spending, but so have creditors.  The creditors could in principle provide an increase in spending to offset the decrease in  debtors' spending.  They aren't and thus the economic recovery is stalled. In other words, the problem is as much or more about the build up of liquid assets by creditors as it is the deleveraging of debtors.  The balance sheet recession view, however, sees the debtors deleveraging as the main problem.  It completely ignores the creditors buildup of liquid assets and its implications for spending.
When one begins to focus on the creditors' role, it becomes apparent that the underlying problem is excess money demand.  For if the creditors are not spending their newly acquired dollars there must be an unsatiated demand for money.  Even in the case where banks are the creditor, the excess  money demand problem is present.  For example, if a bank loan is paid down both loans and deposits fall. If those deposits were checkable, saving, small time, or money market accounts–assets used as money–the money supply falls too. For a given demand for money, this drop in the money supply now means there is--if not already--an excess money demand problem. The key issue, then, is to satiate creditors' demand for money and get them to start spending some of their money assets.  This insight is ignored by the balance sheet view of recessions.
The second problem I have with the balance sheet view of recessions is that it leads people to think there is nothing monetary policy can do.  Part of the issue here is the failure to see the underlying excess money demand problem.  If it were widely understood that the fundamental problem was excess money demand, then there would be more faith in using monetary policy.
Another part of this problem, though, is a failure to look back to history for other examples of balance sheet recessions.  As Frederick Mishkin has shown, households were also significantly deleveraging during the Great Depression.  This experience would fit the standard definition of a balance sheet recession.  Below is a table from his paper that shows household balance sheets in real terms.  Note that between the 1933 and 1936 U.S. household underwent a cumulative deleveraging  in real terms of 20%. This is far more in percentage terms that has happened over the past few years. And yet between 1933 and 1936 the U.S. economy had a robust recovery.  Real GDP averaged almost 8% growth during these years. 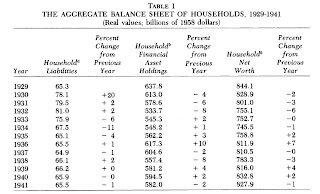 The balance sheet recession view cannot easily reconcile the large deleveraging by households and the rapid real economic growth that occurred between 1933 and 1936.  What can explain it is a more nuanced view that acknowledges creditors with excess money demand were confronted by FDR's original quantitative easing program.  This QE program was far better than recent ones in that FDR clearly signaled a price level target and backed it up by devaluing the gold content of the dollar and allowing unsterilized gold inflows. In otherwords, FDR signaled that he was going to allow a significant and permanent increase in the monetary base and followed through on it.  This change nominal expectations and caused creditors to start spending their money balances.  The same could be done today with something like a nominal GDP level target.

Unfortunately, I fear Edward Harrison is correct in saying Fed has burned up most of its political capital. So it is unlikely to try anything radical like nominal GDP level targeting.  That means the economy will be stuck in stall speed for the time being.

Update II: Just to be clear, there are more creditors than just banks so it is a little misleading to focus solely on banks.
Posted by David Beckworth at 3:22 PM