The FOMC Confuses Me

The FOMC has spoken and here is what it said (my bold):

To support a stronger economic recovery and to help ensure that inflation, over time, is at levels consistent with the dual mandate, the Committee expects to maintain a highly accommodative stance for monetary policy. In particular, the Committee decided today to keep the target range for the federal funds rate at 0 to 1/4 percent and currently anticipates that economic conditions--including low rates of resource utilization and a subdued outlook for inflation over the medium run--are likely to warrant exceptionally low levels for the federal funds rate at least through late 2014.

But no worries, I can take comfort in knowing the Fed going forward will be providing aggressive monetary stimulus based on the second bold above, right?  Ryan Avent seems to think so:


[T]he decision to push out the horizon for a rate increase isn't simply an admission that the economy will be weak in 2014. With the target rate at zero, the Fed can only bring down the real interest rate by raising inflation expectations. To generate higher inflation expectations, the Fed may have to promise to be imprudent at some future date—like 2014. Essentially, the Fed is hinting that it won't stomp on a boom in 2014 even if it's generating increases in prices and wages that might normally make the central bank a little uncomfortable.

That makes sense and others like Gavin Davies and Paul Krugman agree. But wait, I just looked at the FOMC's economic projections and now I am confused again. The FOMC did not just push out the horizon for increasing the federal funds rate, it also lowered its forecast for real GDP for 2012 and 2013.  So is the  FOMC pushing out the horizon because it now expects a weaker economy or is it really trying to be imprudent?  And what is the Fed's definition of imprudence? In 2014 when the FOMC projects it will finally raise interest rates the unemployment rate is expected to be near 7% and inflation should be hovering under the Fed's new inflation target of 2%.  That sounds more like prudence than imprudence to me.

But silly me, what do I know.  Let's turn to the real arbiter of such issues, the bond market.  How do they interpret this policy innovation?  Has expected inflation taken off indicating the bond market expects higher aggregate demand because of this new policy?  Uhm, no: 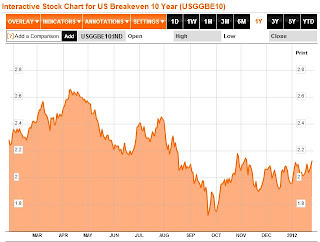 Expected inflation on the 10-treasury remains about where it has been over the last few months.  Not exactly the what one expects from an aggressive stance of monetary policy.  Nothing to see here, move along.

Okay, enough snark from me.  The real problem with the Fed's new communication strategy is that it looks only at the expected path of the federal funds rate.  But that really does not tell us much because a low federal funds rate is only stimulative if it is low relative to the neutral interest rate. And since the Fed is not providing an estimate of the neutral federal funds rate at the various horizons its really hard to know the implications of these forecasts. This lack of clarity is why I am confused and why this new policy probably will not pack much of a punch.

If the Fed really wants to manage expectations, then the FOMC should (1) add an expected path of the neutral interest rate to its forecast or (2) drop the forecast altogether and set up an explicit objective for monetary policy.  I favor the latter and would have the Fed target a nominal GDP level target.  It would be a whole lot easier to understand and implement.  Maybe someday.

Update: I should have said for (2) that the Fed needs to set an explicit level target.  Yes, it now has an explicit inflation target, but unless it is a really flexible one that corrects for for past misses and ignores supply shocks it is bound to create problems.
Posted by David Beckworth at 6:02 PM