Is There Really A German Bias at the ECB?

Following up on a post by Scott Sumner, Christian Odendahl at The Economist pushes back on my claim that there is a German bias to ECB monetary policy.  He argues that ECB monetary policy was not appropriate for Germany prior to the crisis and since then it is only been a coincidence that ECB policy seems more aligned to the needs of the German economy than the rest of the Eurozone. He therefore concludes there is no German bias at the ECB.

I think both Sumner and Odendahl are wrong for several reasons.  First, they reach their conclusion by pointing to specific episodes where ECB monetary policy may have been inappropriate for Germany rather than taking a systematic view of how the ECB responds to regional economic shocks.   If one looks at how the ECB on average conducts monetary policy, then it is hard not to conclude they do so in a manner that favors Germany and the core.  Such evidence can be shown with Taylor Rules and nominal GDP (NGDP) trend graphs, but let me provide some further evidence using the figure below.  It shows for the period 1999:Q1-2011:Q3 the percent of the forecast error for the ECB refi interest rate that can be explained by shocks to the NGDP growth rates in the core and non-core regions of the Eurozone, as well as from shocks to ECB monetary policy.  In other words, this figure shows how important unexpected economic developments in the two regions were on average to changes in ECB monetary policy over this period.  (These results come from a vector autoregression that also controls for the Fed's influence on the ECB policy rate. More details below.*): 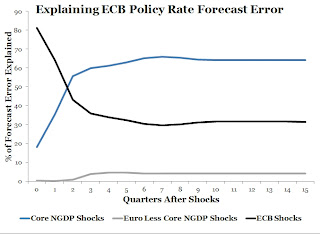 This figure indicates that economic shocks to the non-core region were not very consequential in shaping ECB monetary policy, while shocks to the core were very important.  Empirical evidence like tihs is hard to ignore when trying to make sense of what the ECB has been doing.

The second problem is that Sumner and Odendahl both ignore important political eocnomy considerations, which in my view makes for an even stronger case that the ECB has a Germany bias. First, the Germans only agreed to cede monetary power to the ECB after they got it located in Frankfurt and made sure its first leader (Wim Duisenberg) and chief economist (Otmar Issing) were supporters of the hard money view.  These decisions guaranteed the ECB would inherit the conservative Bundesbank culture and its approach to monetary policy.  Second, since Germany is the largest economy in the Eurozone, its influence was bound to be disproportionate at the ECB.  Germany's inordinate influence was evidenced just last year by the market reaction to the resignation of Germany's Jurgen Stark from the ECB.  It is also evident in the implicit deal making the ECB seems to be doing with the German government on the crisis.  To claim there is no German bias at the ECB is to ignore the significant political influence Germany has over the ECB.  As Ryan Avent noted awhile back, if Germany really wanted to end the crisis via the ECB monetary spigot they could do so.  The fact that the ECB has not aggressively opened its spigot is another testament to the German bias at the ECB.

So yes, there is a German Bias at the ECB.  Fortunately, that bias is ebbing though not fast enough.

Update:  Below is a figure that shows the regional NGDP growth rates (% change from a year ago) and the ECB policy rate.  As explained here, the spread between the NGDP growth rate and policy interest rate can  provide an indication of the stance of monetary policy. 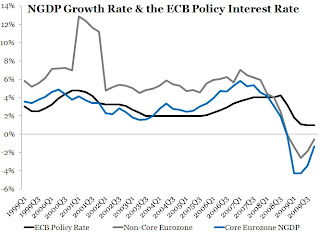 No surprise here to see the ECB kept its policy rate close to the core regions NGDP growth rate.  According to this metric, ECB monetary policy was much more in tune with the core countries prior to the crisis.  (One drawback to this metric is that it does not account for past misses.)

*The core is defined here as the combined NGDP of Germany, France, Netherlands, Austria, and Finland. The results come from a vector autorgession (VAR) using 6 lags, a constant, an the federal funds rate (ffr) as an exogenous variable.  The ffr enters the VAR exogenously for reasons discussed here.
Posted by David Beckworth at 9:21 PM