The Shining Star of Europe?

Fareed Zakaria points us to what may be the shinning star of Europe:

[P]erhaps the biggest reason for poverty-stricken nations like Egypt to pay close attention to Poland is that it is a very rare breed in today's world, especially in Europe. Poland has a strong economy - the sixth biggest in the European Union now and the only European Union country to avoid a recession altogether. None of its banks needed to be rescued.   Its economy grew 4% last year, and is on track to grow 3% in 2012. Why, you'll ask. How did it survive the turmoil in the Euro Zone? One answer is that it has strong domestic demand and has been pouring money into infrastructure projects.   But the real - and fortuitous - reason is that Poland has yet to be allowed in to the Euro Zone - it continues to use zlotys instead of the euro. So unlike Greece or Italy, it was able to devalue its currency to stay competitive.

I know that last part will leave some of my hard money readers in angst, so think of it this way.  Poland has been able to stabilize domestic demand by adjusting its monetary policy accordingly. The Eurozone periphery has not been able to do this and paid dearly as seen below: 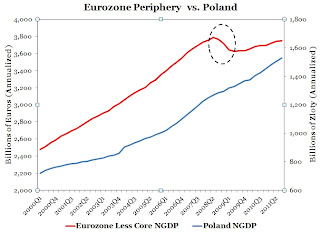 Now Poland has done other things right as noted by Zakaria, but what this contrast highlights is that the Eurozone crisis is as much a monetary crisis as anything else.  Yes, there are deeper structural problems with the Eurozone, but if Eurozone officials want to address these deeper problems they need to first address the immediate monetary problems behind the crisis.  Maybe the shining star of Europe will help them appreciate the monetary nature of the crisis.
Posted by David Beckworth at 7:47 PM