Pushback on the FOMC Transcript Hysteria

Almost everyone seems to be reveling in the release of the 2006 FOMC minutes that show the Fed was not terribly concerned or aware of the looming dangers from the housing bust.  For example, the Atlantic Wire headlines that the "Federal Reserve officials look extra dumb in 2006 transcript" while the Wall Street Journal RTE blog similarly notes that the Fed was "riding housing roller coaster with eyes shut."  Even the USA Today leads with "Fed slow to see fallout from housing."  It is a full blown Fed-bashing party.

Normally, I am the first one to participate in such parties, but here I actually want to push back against this hysteria.  Yes, the Fed like most observers did not understand all the linkages between housing, the financial system, and the broader economy at the time, but this fact does not really matter. What matters--and is missed by these observers--is that the Fed was fairly successful in preventing the housing recession from spreading to the broader economy for almost two years!  From the peak of the housing market in the spring of 2006 to about mid-2008, the Fed was able to keep aggregate nominal spending growing with minimal slowdown from the housing recession.  It did so by keeping nominal spending (and by implication inflation) expectations stable over this time.  The figure below shows this remarkable performance for this period using the TIPs-generated 10-year expected inflation series: 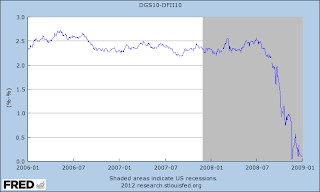 More figures on the Fed's relatively successful performance over the 2006-2008 period can be found here.   Now, ultimately the Fed did make a historically large policy blunder in mid-2008 by allowing the largest peacetime collapse in nominal GDP since the late 1930s. The collapse is evident in the figure above.   But that was mid-2008, not 2006, and it is something the Fed could have been minimized, if not prevented, with something like a nominal GDP level target.  But that is an another story.  The main point here is that all the excitement over the 2006 FOMC transcripts completely ignores the success of the Fed in 2006 and 2007.