My latest  Macro Musings podcast is special one where we look at the macroeconomics of Star Wars and Star Trek. We do so with the help of two guests who are experts on the economics of these two scifi franchises. [Update: sound quality starts out poor, but gets better a few minutes into the show.]

Our first guest is Zachary Feinstein. Zach is an assistant professor at Washington University in St. Louis and  the author of a study titled "It's a Trap: Emperor Palpatine's Poison Pill" where he provides a fascinating look at the financial consequences of the destruction of the second death star. This article received a lot of media coverage last year when Star Wars: the Force Awakens came out. For example, below is a screen shot from a Bloomberg interview discussing the financial burden of building the two death stars. Now with the release of Star Wars: Rogue One upon us it was only fitting to have him join the show and share with us his knowledge of the economics of Star Wars. 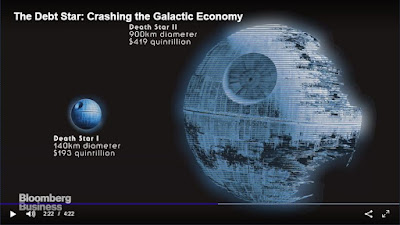 Our second guest is Manu Saadia. Manu is a writer based in Los Angeles and a lifelong Trekkie. He published this year titled Trekonomics: the Economics of Star Trek which is a must read for any serious Trekkie. The book was hailed by Nobel Laureate Paul Krugman as "the book on the topic". This book too has received a lot of media attention. One reason for its popular reception is that book wrestles with many of the issues now facing advanced economies as they become increasingly automated and run by smart networked machines. Below is the cover of the book. 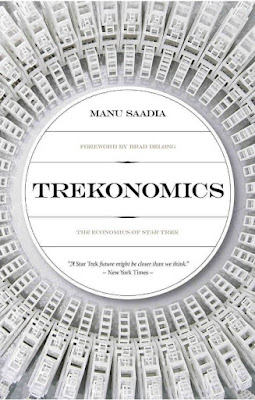 This was super fun conversation. We started out discussing the basic economic institutions--money, interplanetary trade, trade, labor specialization, taxes, banking systems, etc-- of Star Wars and Star Trek. We next turned to business cycle issues--the destruction of the second death start created the mother of all depression--and then to the long-run economic growth in both scifi universes. We concluded by considering the implications from these franchises for us today.

You can listen to the podcast on Soundcloud, iTunes, or your favorite podcast app. You can also listen via the embedded player above. And remember to subscribe since more shows are coming.
Posted by David Beckworth at 10:20 AM