The Trump Shock and Interest Rates

I have a new piece in The Hill where I argue markets are increasingly seeing the Trump shock as an inflection point for the U.S. economy:

It seems the U.S. economy is finally poised for robust economic growth, something that has been missing for the past eight years. Such strong economic growth is expected to cause the demand for credit to increase and the supply of savings to decline

Together, these forces are naturally pushing interest rates higher. The Fed’s interest rate hike today is simply piggybacking on this new reality.

Here are some charts that document this upbeat economic outlook as seen from the treasury market. The first one shows the treasury market's implicit inflation forecast (or "breakeven inflation") and real interest rate at the 10-year horizon. These come from TIPs and have their flaws, but they provide a good first approximation to knowing what the bond market is thinking. In this case, both the real interest rate and expected inflation rate are rising. This implies the market expects both higher real economic growth and higher inflation. The two may be related--the higher expected inflation may be a reflection of higher expected nominal demand growth causing real growth. The higher real growth expectations are also probably being fueled by Trump's supply-side reforms. 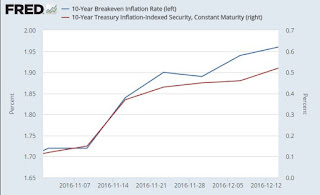 The next figure shows the New York Fed's decomposition of the 10-year treasury into the term premium and a 'risk-neutral' nominal interest rate. Both have gone up since Trump's election. The term premium going up can be seen as investors being less risk averse and therefore demanding higher compensation for holding longer-term safe asset-bonds. The risk-neutral part can be seen as a product of the real interest rate and the expected inflation. And, as we saw in the first figure above, they are both growing: 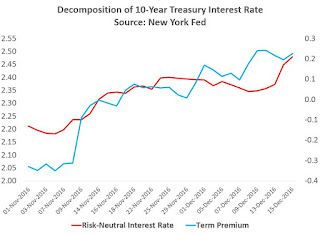 These figures, as well as the surge in the stock market, indicate the markets see more robust growth ahead. Given the timing of these surges, the figures seem to attribute the improved economic outlook largely to the Trump shock.

Now markets may be getting ahead of themselves, but if these expectations come to fruition there is another big lesson to be learned from the Trump shock:

One of the big lessons from this rate decision is that the Fed cannot sustainably push up interest rates through the brute force of monetary policy. Rather, interest rates have to be pulled up by robust economic growth with the Fed following suit.

This understanding also means the Fed did not push interest rates to zero percent in late 2008. Rather, it followed the collapsing market forces that were pulling interest rates down at the time.

To the extent the Fed wants a stable economy, it is limited in how much it can adjust interest rates. Its interest rate adjustments have to follow the health of the economy.

Luckily for the Fed, the health of the U.S. economy seems to have turned the corner and begun a robust recovery. This has allowed the Fed to finally break free from the chains of low interest rates.

This is a point I have repeatedly made over the past eight years. For example, see this older National Review article with Ramesh Ponnuru or this more recent piece from the Mercatus Center's Interest Rate Colloquium.[Update: See also this post to which Paul Krugman replied] My hope is that the lesson sinks in to the many Fed watchers claiming the Fed created 'artificial interest rates'.

Update: Just to make it clear, here is a figure showing both the stock market and treasury market response since Trump's election. 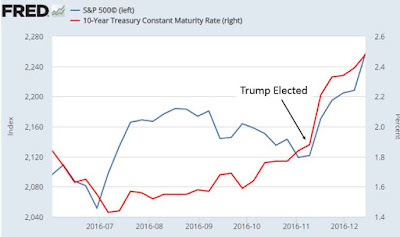