Can the Global Economy Survive a Stronger Dollar? 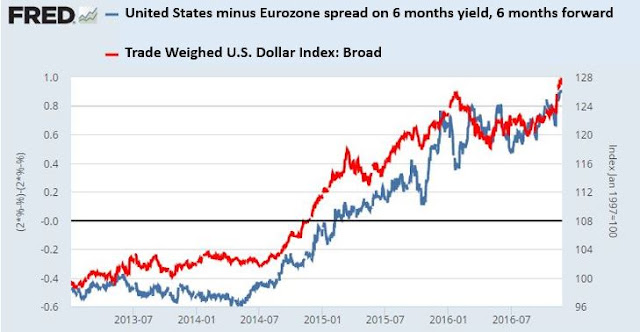 One of the big questions going into 2017 is how resilient the global economy will be to a further strengthening of the dollar. The Trump shock and the Fed's desire to raise interest rates almost guarantee a strengthening of the dollar next year. Unfortunately, this is not the best time for a surging dollar since the global economy is ripe with dollar-denominated debt and anemic growth.

The dollar's initial surge took place between mid-2014 and late 2015 when it grew over 20 percent. This sharp rise was tied to the Fed talking up interest rate hikes while the ECB signaled lower future interest rates. The figure above shows this by reporting the spread between the U.S. and Eurozone 6-month interest rate, 6 months ahead along with the trade-weighted dollar. The figure shows that after plateauing for much of 2016--with some bumps along the way--the dollar has recently started strengthening again as the spread has started to widen. My concern is that this will continue into 2017.

It is instructive to look closer at the dollar surge in 2014-2015 to get  sense of what could happen in 2017. For this initial dollar growth explains a lot of developments in the global economy over the past couple of years.

First, it explains the timing of the financial stress of late 2015 and early 2016. By that period the value of the dollar had reached a point where it caused the financial imbalances in China to start cracking. Those financial stresses temporarily spread to stock markets around the globe.

Second, it also explains why China allowed its currency to devalue, as I suscepted would happen. China was violating the macroeconomic trilemma and could only do so for so long. The stronger dollar forced the hand of the Chinese monetary authorities who have been allowing a moderate devaluation of their currency this year. Now that the dollar is strengthening even more, the capital outflows are increasing in anticipation of further devaluation of the renminbi. And no, I do not think capital controls will solve the problem.

Third, it explains why the Fed has been stuck in a seemingly endless rate-hike-talk-loop-cycle in 2016. The cycle goes something like this: the Fed talks up interest rate hikes → dollar begins to strengthen → bad economic news emerges → the Fed dials down its rate hike talk → dollar pressures ease → good economic news emerges → repeat cycle. This cycle occurs because one, there is approximately $10 trillion in dollar-denominated debt outside the United States per the BIS and two, because many countries still peg to the dollar. A strengthening dollar is a problem for the former since implies a higher debt burden while for the latter it means pegging countries have to import the Fed's tightening of monetary policy. Most Fed officials, other than Governor Lael Brainard, fail to fully appreciate this loop.

Fourth, it explains a sizable part of oil's decline since 2014. Both Ben Bernanke and Jim Hamilton estimated that about 40-45 percent of oil's decline this time is because of weakened global demand. Following similar methods, I estimated it to be about 50 percent. Of course, this begs the question as to what caused global demand to weaken. The obvious candidate was the strengthening dollar putting a chokehold on global economic growth.

Going into 2017 these same dynamics are likely to intensify if market forecasts are correct. Both the stock market and bond market see improved economic growth ahead from the Trump shock. Along with this growth, however, will come higher interest rates and a stronger dollar. So while the U.S. economy seems geared to take off in 2017, the global economy seems positioned to sputter as it faces a stronger dollar. If that sputtering turns into an outright stall then all bets are off for the Fed tightening next year.