One more quick note on the Trump shock and interest rates. For some time I have been following the global safe asset shortage problem and how it has created a downward march of safe assets interest rates. This can be seen in the figure below: 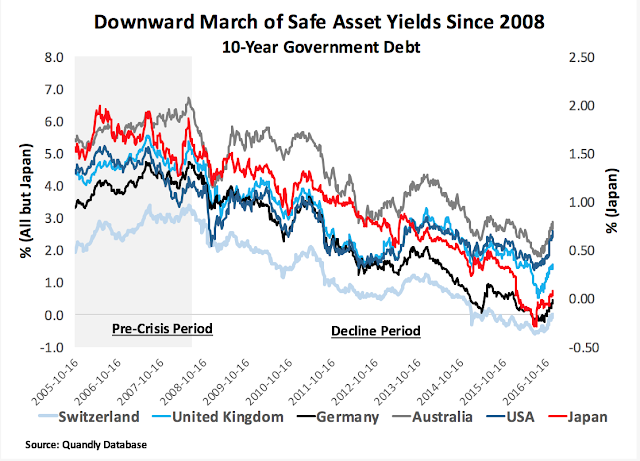 The latest development in this story is that the safe asset interest rates have all started heading up, as seen in the above figure. Even Japan's which is supposed to be targeted at 0 percent but has climbed to 0.8 percent. Now these yields have a long ways to go before reaching normal levels and they started rising before Trump's election. But since the election the ascension of these interest rates has accelerated in many cases. This is a bit puzzling. It is one thing to think the Trump shock has changed the growth and inflation outlook in the United States so that treasury yields are now going up, but why the other advanced economies?

As you may recall, the safe asset shortage story says there has been a price floor (ceiling) on safe asset interest rates (bond prices) that has kept the market for safe assets from properly clearing. (See this pre-2008 figure and post-2008 figure for a graphical representation of this story.) The shortage was a big deal because these securities functioned as transaction assets for institutional investors. The shortage, therefore, amounted to an effective shortage of money that was evident in the below trend growth of broad monetary aggregates that measure both retail and institutional money assets.

There were there three solution paths that could solve this problem: increase the supply of safe assets, decrease the demand for safe assets by improving the economic outlook, or do negative interest rates. These three paths are depicted below: 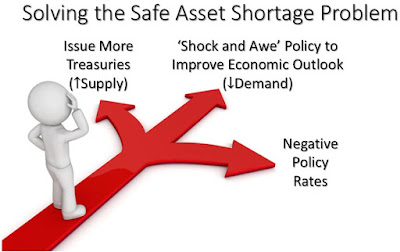 The Trump shock seems to be working through the first two options for U.S. treasuries. First, the Trump infrastructure plans and tax cuts imply larger budget deficits. Second, the spending and supply-side reforms suggest an improved economic outlook that is decreasing demand for treasury securities. This story, though, only explains the U.S. situation.

What is puzzling is why the Trump shock seems to be causing foreign safe assets yields to rise. Maybe it is the reverse of the Caballero, Fahri, Gourinchas (2016) story that says shortage of safe assets problem will spread from one country to another. That is, the easing of safe asset pressures in the United States is causing an easing of safe asset pressures elsewhere. But that story runs up agains the potential global economic downside from a stronger dollar that will result from a stronger U.S. economy. So I am left a bit puzzled.
Posted by David Beckworth at 10:14 PM