Paul Krugman is all over Amity Shales's argument that the New Deal's high wage doctrine reduced employment and ultimately output. He blasts her here, here, and here. His main beef with Shales is that her argument assumes an downward slopping aggregate demand (AD) curve which he asserts was not possible during the early-to-mid 1930s. In his words:

[I]n normal times the AD curve slopes down, we think, because other things equal a higher price level increases the demand for money, which drives up interest rates, which reduces desired spending. (In terms of IS-LM analysis, higher P leads to lower M/P which shifts LM left.)

But in liquidity trap conditions, the interest rate isn’t affected at the margin by either the supply or the demand for money – it’s hard up against the zero bound. And as a result the usual explanation for the downward slope of the AD curve doesn’t work.

As a result, Krugman claims that instead of a downward slopping AD curve there was a vertical slopping AD curve. This, in turn, means any leftward shift of the AS curve from the high nominal wages should have no effect on output. Here is his money graph: 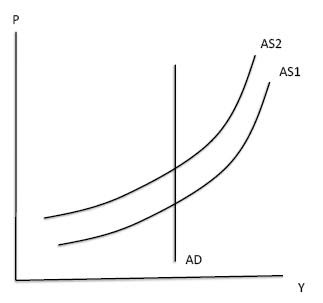 There is a problem, however, with Krugman's story. It assumes there is no real balance (or pigou) effect and if there is one Krugman claims it is swamped by the impotency of the interest rate channel effect and the effect of debt deflation. This assumption is highly controversial. I can buy that there was some steeping of the AD curve, but to forcefully conclude that it was perfectly vertical and, thus, high nominal wages had no effect on employment and output seems too extreme. Where is the conclusive evidence?

What is really remarkable is that despite this empirically-unsupported assumption, Krugman concludes as if it is truth and, therefore, claims that those observers who think otherwise are not "thinking it through":

The key point, then, is that the reality of a liquidity trap in the 1930s has crucial implications for what we think about the effects of policies like the NIRA. People who assert that New Deal support for wages made the Depression much worse aren’t thinking it through. They’re implicitly assuming – not demonstrating – that the AD curve had a “normal” slope, even in the depths of the Depression. But it didn’t.

Krugman may be correct in his assumption about the real balance effect, but I think one can reasonably disagree with him on this point until there is conclusive evidence.
Update: Tyler Cowen also questions Krugman's vertical AD curve.
Update II: Paul Krugman explains why he dismisses the real balance effect.
Posted by David Beckworth at 3:56 PM