About that Runaway Inflation The Fed is Creating

I am having a hard time finding it when I look to inflation expectations.  Here is the average annual expected inflation rate over the next five years implied the spread between nominal and real yields on treasury securities:
(Click on figure to enlarge.) 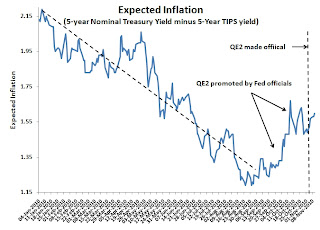