Paul Krugman replies to my post on QE in the Great Depression. He then notes that Gautti Eggertson corresponded with him on this discussion:


Gauti Eggertsson writes in to follow up on my piece on quantitative easing in the Great Depression. He points me to a 2008 paper (pdf) in which he shows that the coming of FDR, combined with America’s exit from the gold standard, was seen by markets as a huge regime change; it was, said FDR’s own budget director, “the end of Western civilization.”

This regime change immediately shifted expectations of future inflation, well before there was any actual surge in monetary base. That, rather than the quantitative easing per se, is how monetary policy — or more accurately, expectations of future monetary policy — gained some traction in the 30s liquidity trap. Again, an important lesson — but how relevant is it to current circumstances? Bernanke, unfortunately, cannot convince people that he’s bringing the end of Western civilization.

Two remarks.  First, this is the point I was trying to make in my initial post: change inflation expectations and  follow up with actual changes, as needed to support those expectations, in the monetary base.
Second, I don't understand Krugman's dismissal of this insight as relevant for today.  There are many folks out there who do think Bernanke is bringing an end to an important feature of Western Civilization today: the value and importance of the dollar. In fact, Krugman himself admitted just last week he was shocked to see such beliefs. It gets worse, there are some who believe Bernanke's QE2 could usher in civil unstrife and maybe even a civil war. As noted by Ryan Avent, Karl Smith, and others, this Bernanke radicalism is already being reflected in the markets.  Below is expected inflation rate from coming from the bond market. Note that after a nine-month fall it does a sudden turn around once the Fed starts talking up QE2 (Click on figure to enlarge): 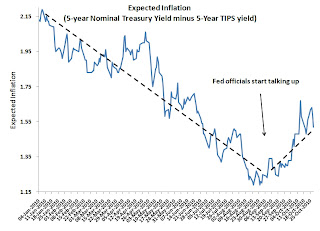 What more does Krugman need to convince him that Fed is already shaping inflation expectations and can continue to do so if it plays its cards right? Again, have some faith in the efficacy of monetary policy.
Posted by David Beckworth at 1:54 PM