Bernanke Does Not Have a Magical Commodity Price Wand

A few weeks back, Paul Krugman made the case that surging commodity prices do not necessarily mean U.S. inflation is about to take off:

Scott Sumner recently made a similar argument  in terms of gold prices:

The TIPS spreads over the next 5 years suggest roughly 1.7% annual inflation—slightly below the Fed target, even after the announcement of QE.  Some point to the world gold market, but unlike TIPS spreads this doesn’t provide a point estimate of expected inflation in the US.  Rather it reflects all sorts of factors such as expected new discoveries of gold, negative real interest rates, and gold acquisition by developing country central banks.  Furthermore, gold prices have also risen sharply in yen terms; does anyone believe this is a forecast of high inflation in Japan?

The key point being made here is that commodity prices are influenced by many factors, not just U.S. monetary policy.  Therefore, it would be difficult to draw any conclusions about expected inflation from them. I decided to do a quick check on these claims by looking at the relationship between the year-on-year percent change in commodity prices and the year-on-year percent change in industrial production for  both emerging economies as whole and the United States for the period 2007:12 - 2010:8. The data comes from the IMF and the Netherlands Bureau for Economic Analysis. What I found is that the the emerging economy group rather than the Unite States was more closely associated with changes in commodity prices: (Click on figure to enlarge.) 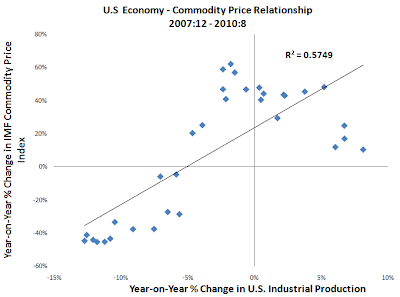 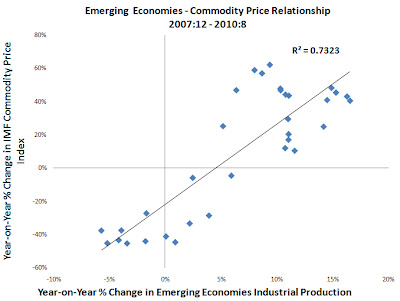 These figures indicate that the wide swings in commodity prices over the last few years have more to do with the emerging economies than with the U.S. economy.  The Federal Reserve, then, may not  be as important a determinant of commodity prices as some observers believe.  More importantly, there are no sure signs that the Federal Reserve is unleashing a massive inflation.  If anything, the Fed is keeping inflation too tame.
Posted by David Beckworth at 12:38 PM