A Defection from the "Open Letter to Bernanke"

Over at FrumForum, Noah Kristula-Green gets some of the Open Letter to Ben Bernanke signers to discuss their motivations for doing so.  One of the signers, Charles W. Calomiris, looks like he does not belong on that letter:

Charles W. Calomiris of the Columbia University Graduate School of Business told FrumForum in an email that he favored keeping interest rates were they currently were:

There are many reasonable alternative views on how to target monetary policy. I favor Ben McCallum’s proposal to target nominal GDP growth at about 5%. Since we were on track with that target before QE II, at least for the moment, I would neither be raising or lowering interest rates.

Though he also stated that he would be in favor of a looser monetary policy if the evidence could convince him the circumstances warranted it:


If there were evidence of a need for further loosening to raise the growth of nominal GDP to that target rate, then some quantitative easing might be a reasonable proposal.

If Calomiris believes in level targeting rather than growth rate targeting he definitely does not belong on that letter.  Below is a figure showing the level of nominal GDP, its trend, and its forecast through the end of 2011.  (Click on figure to enlarge.) 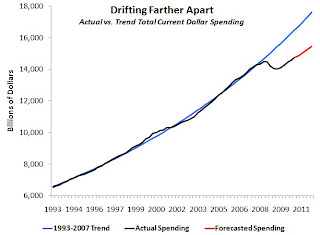 Source: Survey of Professional Forecasters, FRED Database
The gap between actual and trend nominal  GDP in this figure is troubling, but more so is the fact that  it is projected to grow over the next year.  And yet folks are upset overQE2!  Nominal GDP is nothing more than total current dollar spending.  This is something the Fed can and should stabilize.  That real problem with the Federal Reserve is not that its doing QE2, but that it is failed to stabilize nominal spending in the first place.
Posted by David Beckworth at 3:24 PM