A key objective of QE2 is to raise nominal spending.  Given sticky prices and excess economic capacity, this increase in nominal spending would boost the real economy.  Now the way QE2 can raise nominal spending is by raising inflation expectations.  Higher inflation expectations creates the incentive for banks, firms, and households sitting on money to start spending it.  In fact, the key problem facing the U.S. economy right now is an excess money demand problem.  While it is true that rising inflation expectations may temporarily lower real interest rates too and thus stimulate interest sensitive spending, this effect is of second-order importance and is only temporary.  The real and lasting reason rising inflation expectations are important is that they address the excess money demand problem.
Many observers miss this important point and its implications for interest rates. Imagine QE2 is successful in breaking the excess money demand problem and aggregate spending increases. The real economy starts recovering too.  These developments would imply the following: (1) expected inflation must have picked up at some point and (2) real interest rates would start rising in response to the recovery of the real economy.  In other words, one would expect to start seeing nominal interest rates--the sum of the real interest rate and expected inflation--to start  increasing if QE2 is successful.  QE2, then, would not only be a boon to the  real economy, but also to savers and folks living on fixed income given the rise in real interest rates.
Now I think QE2 should have been implemented differently--the Fed should  have announced an explicit rules-based nominal target and forcefully commit to maintaining it--and I am concerned that political pressure may prevent it from being effective. Still, if it does work in its current form then rising yields would be one sign of success.  Though it is probably too soon judge its effectiveness based on this criteria, here is a look at the expected inflation and the real yield on 10-treasury securities.  The figure covers the last month and half, the time period when Fed officials first started talking up QE2 up through the present. (Click on figure to enlarge.) 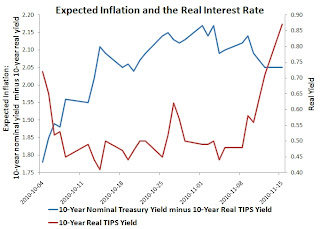 Source: FRED Data
The blue line in the figure reveals that inflation expectations started increasing in October with the onset of the Fed's full court PR press on QE2.  Inflation expectations had been downward trending all year until this point.  QE2 reversed that trend. So on this point, QE2 appears to be working.  (Inflation expectations, however, have not continued climbing since QE2 was made official and that is a little troubling.) The red line indicates that the real interest rate has seen a sudden spike in the past week.  So on this point, QE2 appears to be working too.  Again, I reach these conclusions with some trepidation since it is so early into the QE2 program.
I raise these points because some observers like the Wall Street Journal and Barrons are looking at the same data and making statements like the "Bond Market Defies the Fed" and "Bond Vigilantes Rise Again." They claim that the bond market is pushing back against the Fed and beating it.  I say not so fast guys,  the bond market may actually be following the QE2 according to plan. Let's wait and see how this plays out, but along the way don't forget that rising yields is actually a good sign.
Posted by David Beckworth at 11:51 AM