Are We There Yet?

No, but today's GDP report indicates we are getting closer.  Total current dollar spending, as measured by final sales of domestic output, grew an annualized rate of 7.3%.  This is fantastic news. We need several more quarters of catch-up growth like this to bring nominal spending back to its trend.  Doing so would go along way in making a more robust recovery.
Here is a figure showing the updated final sales along with its 1987-1998 trend. (Click on figure to enlarge).) 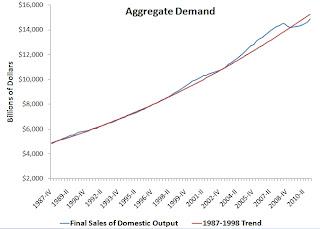 As I explain here, I pick this period's trend because it is the part of the Greenspan period where there were no wide, unsustainable swings in economic activity.  Moreover, 1998 is when the Greenspan Fed for the first time significantly deviated from past practice by lowering the federal funds rates even though the economy was experiencing robust economic growth.  George Kahn provides Taylor Rule evidence that supports this notion.

Update: Bill Woolsey, who prefers a 1984-2007 trend, also takes notice of the acceleration in final sales.
Posted by David Beckworth at 1:46 PM