Is the UK Secretly Targeting NGDP?

Scott Sumner directs us to a Financial Times piece that claims the Bank of England is secretly targeting a nominal GDP growth rate of 5%.  As a proponent of nominal GDP targeting, I was intrigued and wanted to see if the UK data supported this claim.  So I created the figure below using the IMF's IFS database.  It shows the natural log of UK nominal GDP data for the 1990:Q1-2010:Q3 along with a fitted trend for the 1990:Q1-2007:Q4 period. (Click on figure to enlarge.) 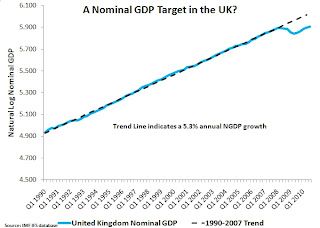 This slope of the trend line indicates an average nominal GDP growth rate of 5.3%.  It seems plausible, then, that the Bank of England is actually targeting nominal GDP.  This is not entirely surprising given there are respected economic commentators in the UK like Martin Wolf and Samuel Brittan that endorse the idea. Of course, it would be even better if the Bank of England were targeting the nominal GDP level and thus aimed to close the NGDP gap in the figure above. However, given the grief the Bank of England is getting for its current monetary policies a level target seems unlikely.
Here, here, and here are a few of my most posts that explain why I like nominal GDP targeting.
Posted by David Beckworth at 11:29 AM