Having My Cake and Eating it Too

Tim Duy and Andy Harless call me out for being critical of the the Fed's low interest rates in the early-to-mid 2000s and for being critical of the Fed for failing to stabilize total current dollar spending.  They say I cannot have it both ways.  They argue that in order to keep nominal spending stable in the early-to-mid 2000s, the Fed had to push the federal funds rate below its neutral rate level for an extended period.  Therefore, it is unfair for me to assign blame to the Fed for the credit and housing boom.  Scott Sumner and Bill Woolsey have also raised this question to me in the past.  So what do we make of it? I am being inconsistent?
Though it may not convince everyone, there is a way to reconcile my two criticisms of the Fed.  The key to doing so is appropriately specifying the trend growth of nominal spending. I will define it here as the trend growth rate over the 1987-1998 period for several reasons.  First, its the part of the Greenspan period where there were no wide, unsustainable swings in economic activity.  Second, 1998 is when the Greenspan Fed for the first time significantly deviated from past practice by lowering the federal funds rates even though the economy was experiencing robust economic growth.  (Robert Hetzel argues in his book that the easing actually started in 1997 when the Fed failed to raise interest rates. See his chapter 16, Departing from the Standard Procedures.) The reasons for the easing were concerns that the global economic turmoil would spill over into the U.S. economy.
With this trend, I now look to see how nominal spending has subsequently fared using two different measures in the figures below.  The first figure shows domestic total current dollar spending.  This is the narrower of the two measures of nominal spending since it leaves out foreign spending on the U.S. economy.  However, it is appropriate for looking at spending by U.S. residents: (Click on figure to enlarge.) 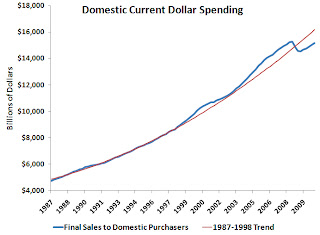 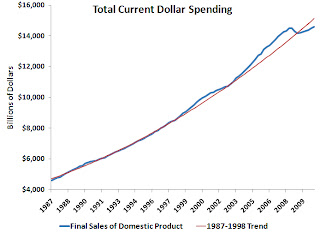 The monetary tightening is less pronounced in this figure, but it is still there.  Both figures imply there needs to be several periods of catch up nominal spending growth. Both figures also imply that the Fed allowed nominal spending to grow too fast in the early-to-mid 2000s.  Returning current dollar spending to trend would be much easier if the Fed would commit to an explicit nominal spending rule that would help shape expectations.
Posted by David Beckworth at 12:32 PM