A Picture Is Worth a Thousand Words

Why should the Fed aim to stabilize total current dollar spending?  This figure makes it very clear why: changes in nominal spending get translated largely into changes in real economic activity.  Its impact on the price level is far less. 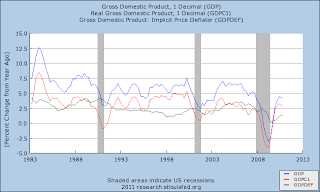 Of course, in an environment where inflation expectations get unanchored, like the 1965-1979 period, nominal spending shocks will have a greater impact on the price level and less influence on real economic activity.   And, over the long-run the trend growth rate of the real economy is determined by real factors.  But for business cycle considerations, it is hard to argue with a monetary policy goal of stabilizing nominal spending when looking at this figure.

Update:  Check out Marcus Nunes who makes an even stronger case using the above figure.  He also looks at the 1965-1979 period referenced above.   Finally, Marcus provides a nice Beckworth smackdown regarding my use of nominal spending trends.
Posted by David Beckworth at 12:21 AM