Ben Bernanke is back and mulling over low interest rates. From the Washington Post:

Blogging isn't dead. At least, Ben Bernanke, former chairman of the Federal Reserve, doesn't think so: He's now blogging at the Brookings Institution. In his first post, he says he wants to write about this fascinating chart, which shows the steady decline in interest rates over the past 30 years or so.

The question of why interest rates keep falling is an important one these days. Former Treasury Secretary Larry Summers has argued that declining real rates are a symptom of secular stagnation, meaning the global economy just isn't what it used to be, for some reason, and might never recover its old strength. Here's what Summers told Wonkblog about his theory, and here's a response from Western Kentucky University's David Beckworth, who disagrees with him.

It would be great to see Bernanke engage this secular stagnation debate. Although Larry Summers never directly responded to me, he did reply to Marc Andreessen's tweetstorm where my critique was raised. The crux of my argument was that the long-decline in real interest rates given as evidence of secular stagnation ignores the sustained decline in risk premiums. Once this phenomenon is recognized, there is no long decline in real interest rates.
Larry Summers replied to my critique with the following:

Markets – in the form of 30-year indexed bonds – are now predicting that real rates well below 2 percent will prevail for more than a generation... I think it is quite plausible and consistent with Marc’s picture that equilibrium real rates were roughly constant at around 2 percent until the mid-1990s and have trended downward since that time.

Looking to inflation indexed bonds or TIPs as a guide to the market's prediction of real rates is also misleading. It too fails to account for a liquidity premium priced into TIPs. On his second point, below is an updated version of the picture to which Larry Summers says he sees a downward trend since mid-1990s. Note that the real interest rate is now turning sharply up whereas before it was still flat. The real interest appears poised to return to its previous trend. 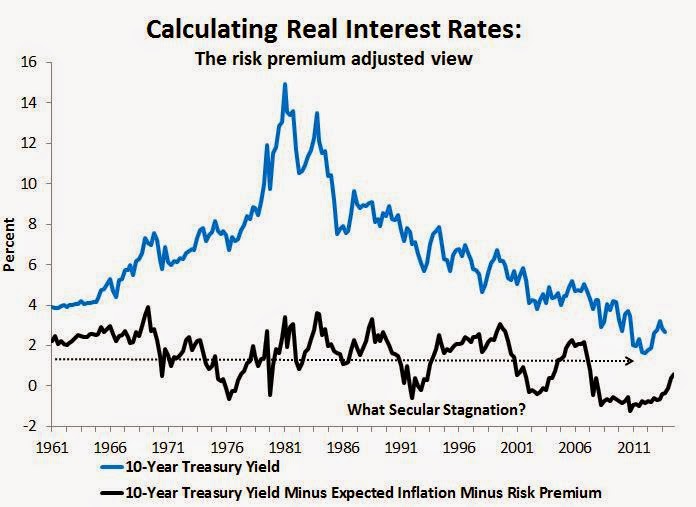 That the real interest rate appears to be returning to its previous trend--rather than finding a new lower one as suggested by Summers--makes sense if we plot this interest rate against the CBO's output gap. This is done in the figure below and reveals a striking fit. It also suggests the real culprit behind the sustained low rates is a prolonged business cycle. Now that the economy finally appears to be on a path to full recovery, the output gap is closing and the real interest rate is following it. So much for the smoking gun of secular stagnation. 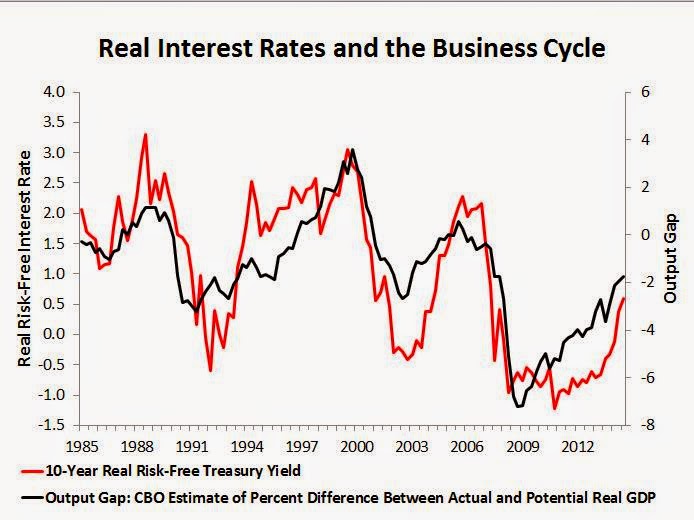 I really hope Ben Bernanke joins this conversation. He had a great speech back in March 2013 that hinted at some of these topics. Welcome to the blogosphere Ben!

P.S. Although my original secular stagnation critique was made at the Washington Post, I did a more thorough follow-up piece with Ramesh Ponnuru at the National Review. I also did an interview with a Brazilian newspaper on secular stagnation.
Posted by David Beckworth at 7:50 PM