The Canadians and Their Resilient Banking System

One of the interesting facts from the Great Depression of the 1930s is that Canadian banking system had zero bank closings. This accomplishment is all the more amazing when one considers that there was no central bank in Canada until 1935. The United States, on the other hand, had a central bank from the outset of the Great Depression but still somehow managed to let thousands of banks to fail. This development caused a massive disruption of financial intermediation in the United States and is believed by some observers to be the main reason for the severity of the the U.S. Great Depression. As I have noted before, many observers believe the resiliency of the Canadian banking system during this time was the result of its extensive branch banking system, something that was absent from the U.S. banking system. Allowing a bank to have branches gives it a more diversified portfolio of assets as well as making it able to draw on reserves across many branches. Branch banking, therefore, makes a banking system more capable of handling economic shocks.

TORONTO, Oct. 15 -- While the United States reels from the global financial crisis, with credit markets still frozen and stock prices careening from highs to lows, Canada has remained relatively insulated.

Canadian banks have not gone shaky like their American counterparts, economists and other experts said. There is no subprime mortgage or home foreclosure mess. And while the United States fears a prolonged recession, Canadians have remained relatively sanguine, convinced that they are in a good position to weather the economic tsunami from the south.

According to the Canadian Banking Association, one reason for the system's solidity is that banks are national in scope. Each of the largest five institutions has branches in all 10 Canadian provinces, meaning they are less susceptible to regional downturns and they can move capital from region to region, as needed. "As far as I am aware, no American bank has branches in all 50 states," banking association spokesman Andrew Addison wrote in an e-mail.

The article also mentions better bank regulations as another factor. Still, what is so striking to me is that 70+ years after the Great Depression we still do not have the level of branch banking found in Canada.

Update: Here is a figure from Mark Perry's discussion on the Canadian vs. U.S. banking system during the Great Depression: 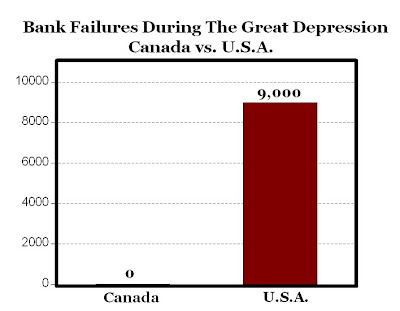 Posted by David Beckworth at 11:20 AM

Email ThisBlogThis!Share to TwitterShare to FacebookShare to Pinterest
Labels: Banking